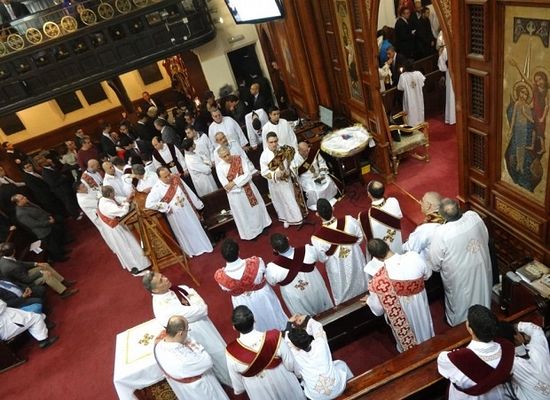 Among Britain’s Coptic Christians there was a sense of stupefied horror, as film of the murder of 21 Egyptian Copts, at the hands of Isis in Libya sent shock waves throughout the community.

The video of the mass beheading of the 21 prisoners in Libya was released on Sunday, but for days images of captives in regulation orange uniforms, paraded by black-clad gunmen had haunted the international community.

“We have met this news with sorrow and disbelief – although people saw this coming there was a hope that something could be done to change the outcome,” said Bishop Angaelos, General Bishop of the Coptic Orthodox Church in the United Kingdom. “When it came it was so heartless and inhumane.”

Angaelos, head of the orthodox Christian community in the UK, received a call from the prime minister, who expressed his condolences for the murder of the guest workers, who were kidnapped in Sirte, on Libya’s coast, by Isis members in December and January. A video made of the murders titled “a message signed in blood to the people of the cross’, makes reference to the “hostile Egyptian Church”.

“The prime minister focused on the fact that these actions are unacceptable by the principles we live by in this country,” he said.

That may come of little consolation to UK Coptic Christians, most of whom have relatives in Egypt, some from the very same villages and provinces as the killed hostages.

Egyptian Coptic Christians are the largest Christian community in the Middle East, with an estimated 10-15 million members in Egypt – around 10% of the population. Coptics follow an orthodox strand of Christianity which requires them to closely follow the church’s dogma, which includes fasting for some part of 210 days a year. They formed a community in the UK in the 60s, which now has around 20,000 members. Many of them are now living in fear, said Father Antonious Thabet, a priest at St Mark’s church in Kensington.

“We are very scared, some people in my congregation have said they are scared to be in the UK – these people are everywhere,” he said. “There is anger against leaders who did nothing. They have to do something, saying that we are sorry this had happened is not enough.”

Special services will be held in Coptic churches throughout the UK this week, while peaceful demonstrations of solidarity are planned for the weekend. Magda Sakr, an Egyptian muslim who has lived in the UK for 20 years will be among the mourners.

“People are trying to separate Christian and Muslims, but we are all Egyptian,” she said, fighting back tears. “These people have nothing to do with Islam, they are maniacs. This is not about religion, it is about standing up for humanity.”

Her friend, Shenouda Shalaby, a doctor at Ealing hospital and a member of Father Antonious congregation, said the world needed to wake up. “We are not fighting an invasion – this ideology is already here, it is spreading like a cancer,” he said. “To be frank this is only the tip of the iceberg. Unless the world unites, it will be a disaster for all of us.”