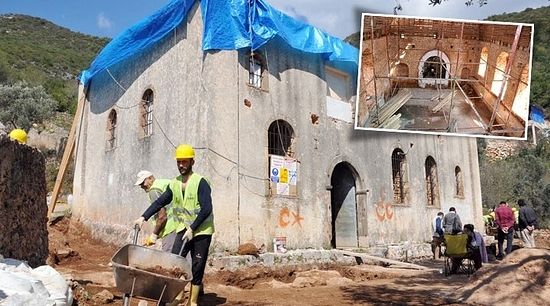 Approximately ten miles from the Alanya city center, near the resort town of Antalya and within the limits of the village of Hacı Mehmetli is the Greek Orthodox Agios Georgios Church, now being restored by municipality.

The Alanya municipality is supervising the TRY 138,000 renovation. The church will be used as house of worship, cultural center and multi-purpose hall.

The property rights were transferred in 2013 from the Directorate of Foundations to the Alanya Municipality for ten years. The renovation of the church was approved by the Antalya Regional, Cultural and Natural Heritage Preservation Board, and it is expected to be finished within four months.

Stating that Alanya has been a home to many civilizations over the centuries, Alanya’s Mayor Adem Murat Yücel said, “To protect Alanya’s history, we have begun renovating it for the tourism of the region.”

The exact date of the church's construction is not known. From the inscription, a carving in both Greek and Turkish and exhibited in the Museum of Alanya, it was last restored in 1873. By the year 1924 the church was used continuously.

More recently, the building's use underwent a renaissance and has been made available to the Russian Orthodox Christians in the city once a month for services.

The building will now be restored as close to to its original state as possible. An official from the municipality said, “We have information which indicates that before the population transfer between Greece and Turkey in 1922, it was used as a place of worship. Afterwards worshippers were able to pray here on special days and with official permission.” The Greek Orthodox Church under Ottoman rule
Huntington could have been writing about the churches today, for little has changed over the more than 90 years that have passed.