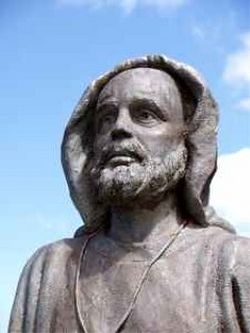 St. Senan
St. Senan, one of the most famous Irish saints of his age, was born into a Christian family in the second half of the fifth century near Kilrush in present-day County Clare. His parents’ names were Erean and Comgella. The name “Senan” means “a little wise elder” in Old Gaelic. St. Patrick, the Apostle of the Irish, predicted to his parents the birth of their great son.

At first the young Senan tended his father’s herds. Later he became a monk in the monastery in Kilrush under the spiritual guidance of an experienced monk called Cassidan and then, finally, he moved to the monastery of Kilmanagh in County Kilkenny where he completed his training. It was said that St. Senan was also trained spiritually in other Irish monasteries, for example, at the monastery of St. Kevin of Glendalough and in County Kerry. On the completion of his education Senan was ordained a priest and began his extremely active missionary work. He founded his first monastery at Enniscorthy in County Wexford in about 510, and a local ancient parish is called Templeshannon (“Senan’s church”) after him to this day.

Most probably St. Senan then travelled to Rome and Gaul, visited the great monastic centre of Tours and then Brittany where he may have built a church In Plouzane. On his way back he stopped in Wales where he stayed for some while at the monastery of Mynyw under St. David. It is possible that during his travels St. Senan also visited Cornwall, where he founded a church. 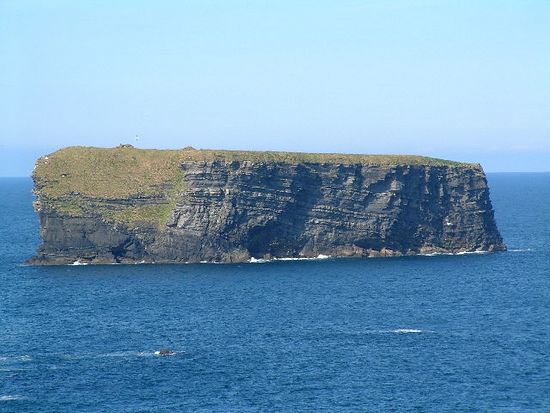 Returning to his native Ireland in about 520, the saint established many churches and monasteries there, one of which was most likely situated at Inniscarra in County Cork, which became very famous. Other monasteries established by him were situated in Innisluinghe, the Bishop’s Island, Inishmore (or Deer Island), and Enniskerry (or Mutton Island) in County Clare. St. Senan undoubtedly founded many other monastic communities, especially at the mouths of rivers, for example, on the River Slaney. Finally, he settled on Scattery Island near Kilrush, close to the delta of the River Shannon, where he built his most famous and greatest monastery, with five churches. This took place between 535 and 540. Scholars suppose that here he founded not only the monastery, but also a bishopric, thus becoming a bishop of a large diocese with its centre in Scattery. 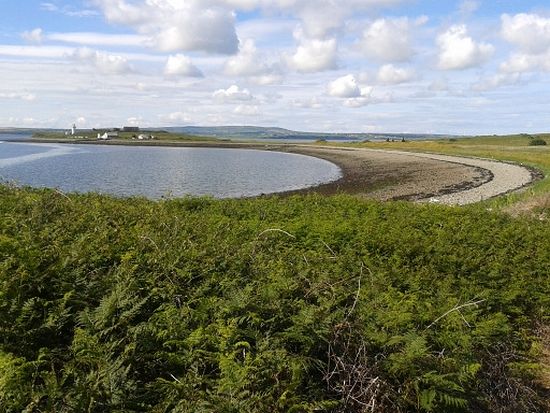 Not only did the simple faithful , the suffering, monks and beginners in the ascetic life flock to the Holy Abbot Senan, widely famed for his miracles, but also other great saints—his contemporaries—such as St. Brendan and St. Kieran. Notably, the saint had so many disciples whom he instructed, that every time he left the monasteries he had established he blessed dozens of them to remain and live there and blessed the most experienced ones to be in charge of these communities. Scattery was his main monastic establishment, where he was abbot for the rest of his life. According to tradition, Senan’s younger contemporary, St. Dallan Forgaill, a prominent ascetic, scholar, poet and writer of that time—who was blind for most of his life—was among his friends. St. Dallan even composed a moving eulogy dedicated to St. Senan written in a very beautiful style. It was said that the rules in St. Senan’s monasteries were so strict that he even forbade women ever to enter them. However, the holy missionary himself founded two convents for women, and, according to tradition, he reposed during a visit to one of them.

After his repose, which followed in 544 or 546 (according to another version, in 560) the holy abbot was buried on his most beloved Island of Scattery. St. Senan was greatly venerated all over Ireland for many centuries after his death. In his lifetime he was noted for his learning, utter contempt for any riches and possessions, self-denial, austere asceticism (according to his life, the future saint observed an extremely strict fast from childhood) and craving for “wandering for Christ”—a practice which was characteristic to Irish and other Celtic saints. His eloquent sermons always attracted crowds of believers. The saint undertook active missionary labors in County Clare, especially around Scattery. Many miracles were associated with St. Senan and attributed to him. We will mention just a few of them.

His mother gave birth to him while walking in a forest. When she felt she was in labor, she grasped the branch of a tree which at once began to blossom as a sign that the mother was to bring a holy man into the world. As a child the saint used to pasture herds at the mouth of the river. Once during a strong flood tide, the water suddenly and miraculously parted before the saintly youth and his herd, making way for them; St. Senan saw in this event the Hand of God and promised to devote all his life to the service of the Almighty. St. Senan later in his life chased away a giant sea monster from the island of Scattery (to all appearances, it was a demon). This monster lived near the island and terrorized the local inhabitants, so neither man nor beast could pass the place where it dwelt. Settling on this island, St. Senan decided first of all to drive away this monster. Putting all his hope in God, the saint dared to approach it and, making the sign of the cross before it, commanded the monster to leave the island forever in the name of Jesus Christ. The locals began to live a quiet life from that day. 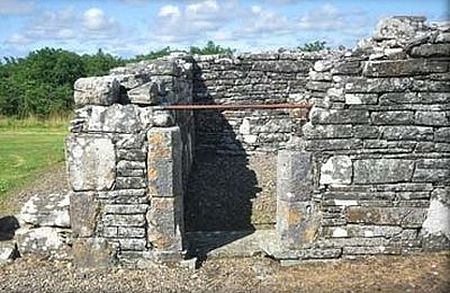 What is believed to be St. Sennan’s grave, together with “St. Senan’s bed”—a tiny chapel in which, according to tradition, the saint was buried—survive to this day in Scattery. His precious relics may still lie there. The holy abbot and missionary is listed among “the twelve apostles of Ireland” though it is not known whether he studied in the seminary of St. Finnian of Clonard with others. Among the relics closely connected with this great early Irish saint we should mention his personal bell, still preserved at the Irish Royal Academy in Dublin. 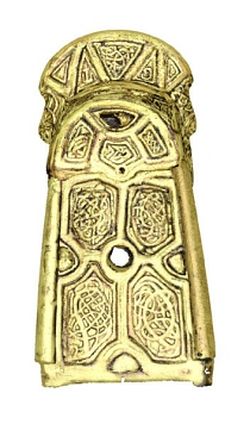 On Scattery Island, a destination for pilgrimages for some 1500 years, there are numerous ruins of monastic and church buildings, and at least some of them are directly related to St. Senan’s monastery. Among them the following objects can be distinguished: remains of the personal cell and chapel of St. Senan as well as remains of several churches and an early cathedral. Indeed, St. Mary’s cathedral existed here until the fourteenth or fifteenth century. Other holy objects on this site include a surviving holy well, a Celtic cross shaft and the round tower of the former monastery. This tower is one of the most unique in this county and is believed to be the tallest surviving tower of this kind in all Ireland (120 feet high). These impressive holy sites still remind pilgrims of an important and large “monastery city” that once existed here thanks to St. Senan. 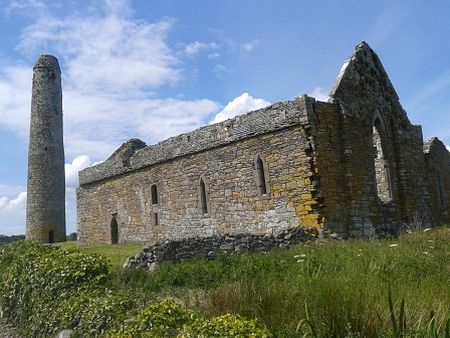 In the town of Kilrush a parish church is dedicated to St. Senan to this day, and a local school bears his name as well. Another church, Little Senan Church, with the same dedication, can be found several miles away in Monmore. Scattery is situated within the estuary of the River Shannon, about 15 minutes from Kilrush by boat. Deer Island (Inishmore, “the great island”) is located on the west bank of the Irish River Fergus in County Clare along which St. Senan evangelized too. Here Senan built a monastery and appointed his disciple, St. Liberius, its first abbot. Church ruins, graves and a holy well are what remains of the ancient monastery. The tiny Bishop’s Island, in fact a sea stack which is almost inaccessible, has some minor remains of a monastery founded by Senan, notably a chapel. 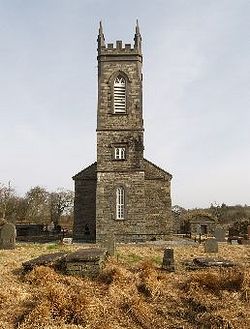 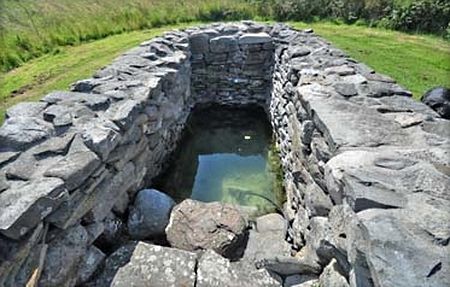 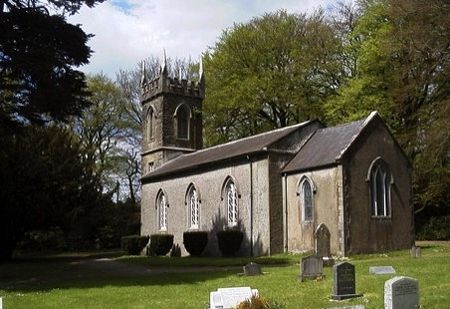 The town of Enniscorthy, where Senan built his first monastery, today belongs to County Wexford. One of the Catholic churches in this town is dedicated to St. Senan to this day; it stands close to the church dedicated to another well-known Irish saint—Aidan of Ferns. Both stand under the shadow of the hill called Vinegar Hill. At Inniscarra in County Cork a local Anglican church (Church of Ireland) is dedicated to St. Senan, who founded a monastery here. There are several more parish churches and at least one or two holy wells in Ireland dedicated to this great saint. Unfortunately, all but nothing remains on Mutton (“Sheep’s”) Island. In ancient times it was called Fitha. In March 804, according to ancient annals, there was a strong earthquake here, which caused a tidal wave that swallowed a large tract of the shore and actually divided the place into three islands, Mutton Island being one of them. It is no longer inhabited; remains of St. Senan’s chapel could be seen here until the nineteenth century, but now only traces of two crosses can be distinguished. Finally, the Cornish parish of Sennen (near Land’s End) and its medieval church may bear the name of St. Senan, though it is also likely that its patron is in fact a local female saint with the name Sennen.

Holy Father Senan, pray to God for us! Venerable Samthann, Abbess of Clonbroney in Ireland
Commemorated December 18/31
Dmitry Lapa
St. Samthann was distantly related to St. Patrick who lived over 200 years before her. As a child she was given to the Irish king Cridan to be brought up. When Samthann grew up, the king found her a suitable, rich candidate as a husband. But the future ascetic did not wish to marry, but rather to live in chastity, prayer and service to God.

Saint Ciaran, Abbot of Clonmacnoise in Ireland
Commemorated September 9/22
Dmitry Lapa
Ciaran was educated by the prominent theologian St. Finnian of Clonard, the spiritual father of the “Twelve Apostles of Ireland”. Here he showed himself to be a most gifted student and one of the most zealous monks.
Comments

Dmitry4/21/2021 11:32 am
There is also St Senan's well in County Kerry, that was reputedly founded by the saint himself in the 6th century! It heals blindness and other eye (and not only eye) diseases. Locals still keep record of miracles! The Holy well is located in- Killsinan in the townland of Mountcoal near the town of Listowel, south-western Ireland. I heard about this well from a friend of mine after this piece had been written.
×