The Presbyterian Church USA, which accounts for just under two million members, voted on Tuesday to expand its definition of marriage to include gay and lesbian couples. 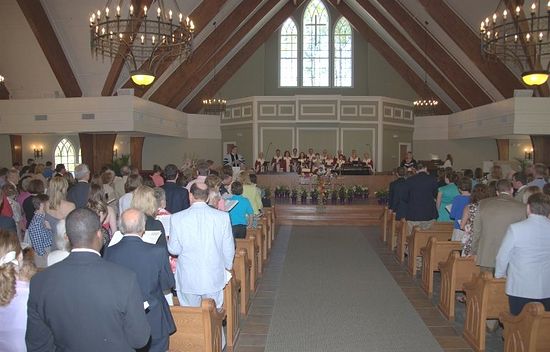 The church, which represents the largest Presbyterian denomination, made the announcement after the majority of its 171 regional governing bodies approved the change.

Its revised constitution will now read that marriage is "a unique commitment between two people, traditionally a man and a woman," as opposed to just a man and woman previously.

The new language, which was approved by the church's General Assembly last year, had to be ratified by more than half its regional bodies.

A grouping of congregations in the state of New Jersey became the 86th body to do just that on Tuesday.

The decision is likely to drive a further wedge between Presbyterian USA members, who have taken opposite sides on the issue.

At last year's Presbyterian General Assembly, the church also gave its pastors a green light to marry gay and lesbian couples in states where such marriages are allowed.

"These decisions have been welcomed by some and are a disappointment to others," Gradye Parsons, stated clerk of the General Assembly, said at the time.

The Presbyterians' position stands in sharp contrast to that of the Roman Catholic church, the biggest single denomination among Americans, and fundamentalist Evangelicals who strongly oppose gay marriage.

In 2011, the Presbyterian Church USA voted to approve the ordination of openly gay and lesbian clergy.

The constitution's new wording will take effect on June 21.

The Presbyterian Church USA had 1.76 million members as of the end of 2013.

Federal Discrimination Against Religion?
Religious groups will not receive an exemption from an executive order signed this morning by President Barack Obama banning “discrimination” based on sexual orientation or “gender identity” by federal contractors.
Comments
×