Metropolitan Seraphim of Piraeus has severely criticized attempts revise the Church tradition regarding sodomy, reports AgionOros.ru with reference to Romfea. 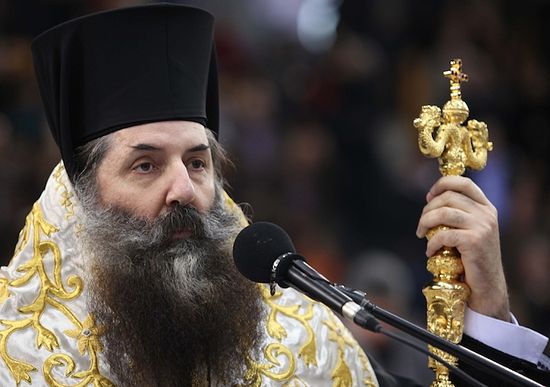 “The enemy is striving to make us, people, slaves to the flesh and to the sin, to turn spiritual creatures into material ones, like dumb animals…”

“The Orthodox Church respects private life and man’s free will. However, it should be noted that the process of legalization of the crime against the human nature and physiology is going on: today the vile passion of homosexualism has been legally recognized; tomorrow pedophilia will be legalized (take Holland, for example); the next will be bestiality (Germany). This is the gravest crime against Eternal God and the human personality, repeating the blasphemy of Sodom and Gomorrah.”

“Justification, support and promotion of these shameful and ungodly passions as well as attempts to present them as a variation of the norm are unnatural and inadmissible. The Holy Scriptures which express the Will of God more than once condemn homosexuality as a passion, a sin and abomination.”

“For all the Holy Fathers homosexuality is one of the most corrupt and unclean sins, an outrageous ingratitude to the Creator, blasphemy and denial of the Gospel. The public propaganda of homosexuality is like a plague on both the family and the society. Moreover, it will cause psychopathological disorders in children raised by same-sex couples (and we are being actively urged to accept this practice).” Largest Presbyterian church in US approves same-sex marriage
Presbyterian Church USA changes its constitution to define marriage as "commitment between two people", rather than specifically a man and woman. “Satan has crawled like a snake into the Finnish Parliament”
Johan Beckman
If the given law is in fact passed, then this will signify the end of Christianity in the official Church of Finland. There will be great problems, and both the Lutheran and Finnish Orthodox Church will break down.
Comments

chris4/10/2015 7:28 pm
God condemned sodoma and gomorra and placed the dead sea above the sunken 5 cities as to show humans how bad sodomy is. now the trenched patriarch Bart of constantinople is abiding to Satan and his longing of the returning of the Antichrist. MAY gOD BURN pATRIARCH bARTHOLOMEW AND ALL HIS EVILMINIONS WHO OPPOSE gOD AND DISRESPECT HIM BY TRYING TO RESSURECT SODOMA AND GOMORRA

chris4/8/2015 7:51 am
Bravo to the .orthodox church, seemd sir that You are the only one willing to stand up and say the truth. May God richly bless you.

Thomas Carney4/7/2015 5:54 pm
The fact that there are even discussions on whether or not any part of the Orthodox Church is beyond horrific. The laity need to hold their bishops accountable. The Catholic Church since "Blessed" Paul VI has shown its true colors and is infested with many homosexuals.
×