Alcohol may be removed from sale in Russia's food stores

Alcohol drinks may disappear from Russia’s mainstream food stores – soon they will probably be sold only in specialized store units. 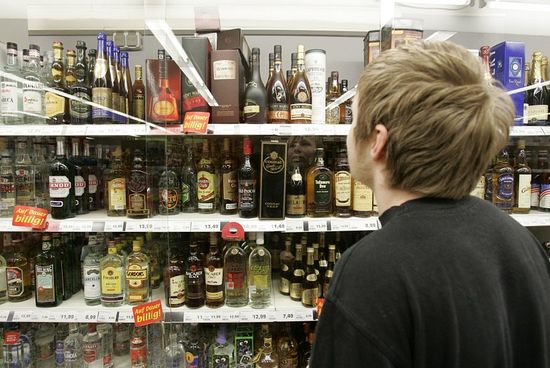 As Evgeny (Eugene) Bryun, chief psychiatrist-narcologist of the Russian Public health ministry, reported to the Izvestiya newspaper, he intends to raise the question of amendment of the legislation in the area of sale of alcoholic products on the ministerial level. The Public health ministry’s press service has informed that the Ministry is ready to discuss the initiative, and has noted that this measure demonstrated its efficacy in many other countries long ago.

The experts state that at the present time sale of alcohol makes up 12% of supermarkets’ total receipts and about 40% of the total receipts of smaller shops.

The Public health ministry’s press service says that alcohol on supermarkets’ shelves is often a temptation for some Russian customers who were at first not planning to have a drink.

According to Evgeny Bryun who has put forward this idea, alcohol should be sold chiefly in specialized shops.

In Bryum’s view, if the legislation is amended alcohol sales will be reduced.

He has also noted that Russian residents over the past five years have consumed less alcohol.

Sale of alcoholic drinks exclusively in specialized shops is already practiced in Scandinavia (Finland, Denmark), and since January 1, 2015 – as a local law in the Sakha/Yakutiya Republic (Russia). New Book Published: Helping Drug Addicts – the Basics: an Orthodox View
The book gives a detailed description of the stages of the Church’s help to those who are on drugs.