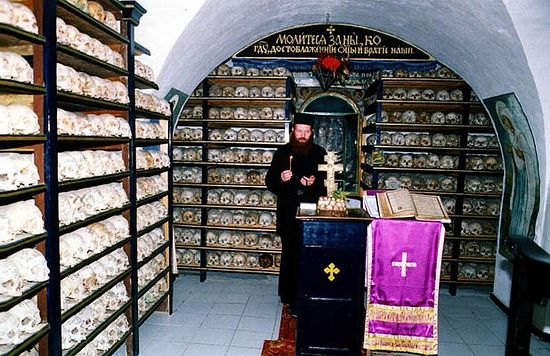 On May 9, 2015, the 70th anniversary of the Great Victory over fascism, a litia for repose of the deceased Orthodox soldiers was served at the Russian St. Panteleimon’s Monastery on Mt. Athos.

According to the report by the Afonit.info website, a memorial service was celebrated in the monastic chapel of rest, where monks departed this life who served in the Great Patriotic War (Second World War) are especially commemorated.

According to Schema-Archimandrite Jeremiah (Alekhin), Abbot of the St. Panteleimon’s Monastery, in 1941 fascism threw a challenge to the whole of the human race. Nazism is the greatest evil invented by the demonic mind in order to destroy all of what is good and pure in the world, to profane and annul the basics of the Christian love. That is why the war into which the Russian people entered in 1941 was a great heroic deed that cannot be overestimated. The Russian Orthodox Church then called upon all its faithful members to stand up staunchly to defend not the Soviet government, nor the Communist regime or atheism, but to defend their motherland which was baptized in the Dniepr [River] by Holy Prince Vladimir, defended from the German invaders by Holy Prince Alexander Nevsky, and called upon for struggle with Mamai by Holy Prince Dimitry Donskoy. We should not forget that the Victory Day in 1945 virtually coincided with the feast of the Resurrection of Christ. Such coincidences cannot be meaningless. So it is appropriate to address you on this day with the Paschal greetings: Christ is Risen! Happy Victory Day! 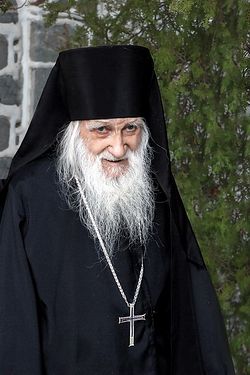 Schema-Archimandrite Jeremiah knows what fascism is like by his own experience and well knows the price of victory. In 1941 he was forcibly taken to Germany where he underwent backbreaking labor, starvation, and inhuman living conditions. In captivity, 28-year-old Yakov Alekhin learned to pray. According to him, prayer comes to a man in trouble, when it seems that hope itself is dying; then prayer becomes the only thread of salvation from despair. There he decided to become a monk, should the Lord vouchsafe to keep him alive. Father Abbot recalls the generosity of common German people, how German women gave them bread through the barbed wire. Fr. Jeremiah says he will remember the taste of that bread forever. In his view, the monstrous ideology made the German people instruments of infernal, misanthropic aims. But this nation is kind-hearted by nature. According to Schema-Archimandrite Jeremiah, Victory Day is not the day marking the victory over the German nation, but the victory over the evil, hatred, diabolical pride, and death. Copy of the Iveron Icon is brought to Australia from Mt. Athos

Copy of the Iveron Icon is brought to Australia from Mt. Athos
The gift of the Athonite Iveron Monastery was solemnly met by hundreds of believers arriving from various parts of Australia.