Greece - relics of Greatmartyr Anastasia, stolen three years ago, yet not found

In April 2015 three years passed since the relics of Greatmartyr Anastasia (also known as Anastasia the Younger, Anastasia of Sirmium, Anastasia the Deliverer of Bonds, or Pharmakolytria; martyred in c. 304, feast: January 4) were stolen from the monastery dedicated in her honor. Sacrilegers penetrated into the monastery church at night and shamelessly stole the head-relic of St. Anastasia together with relics of her companions. Although nearly all the culprits are detained, the whereabouts of the relics remain unknown, reports Romfea. 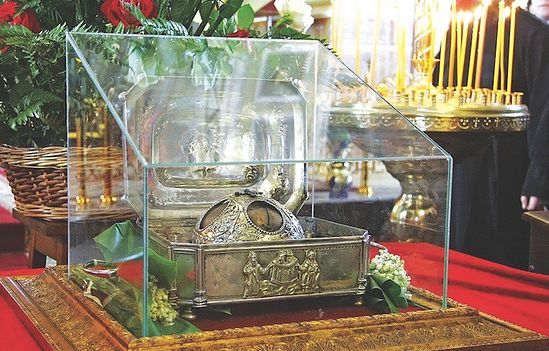 “It was the week of Antipascha. The dawn of Monday was near when unidentified people broke into the monastery, crashed five doors in and broke 15 locks. At 5.45 AM one monastery priest noticed that some relics were missing: the head of St. Anastasia, a reliquary with her right foot, holy relics of Sts. Modestus and Parasceva, a cross from the altar as well as the alms-box had disappeared. It is not just a theft - it is a capture because any relics (in the sense - physical remains of saints) are alive,” said the monastery’s abbot, Metropolitan Apostolos of Miletos.

These holy relics have been in the ancient monastery since the 9th century.

The police are convinced that these were professionals who robbed the St. Anastasia’s Patriarchal Stavropegic Monastery in Vasilika, near Thessaloniki: the locks were cut off as if they were made of paper.

It was the first such incident in the history of the monastery. Several days after the theft the police announced that a Gypsy chief from Romania had organized it, but later this information was not confirmed.

The lawyer who investigated the case said that the “capture” of the relics had been organized on the orders of a wealthy Ukrainian.

Then there was a band of Romanians in North Greece robbing churches. The police registered around 10 similar cases of crimes. It is believed that St. Mennas helped catch the band after the feast of the Dormition, 2012: when the burglars were inside the church dedicated to him, the video surveillance camera “caught” their car and thus the criminals were identified.

At first four of them were caught and later three more burglars were detained. Another three culprits are wanted by the police.

However, they no longer possessed the relics, which are now most likely in private collections. Interpol is currently in charge of solving this problem.

“We pray for return of the relics to our monastery every day,” noted the abbot. “We are addressing the organizers of this larceny as well. It is impossible to receive a saint’s blessing by such a crime! Do give the saint’s relics back immediately – they belong to all the faithful!” Greek liberals are displeased with bringing of relics of St. Barbara to the country
An influx of a great multitude of faithful to the holy relics of Greatmartyr Barbara has produced an immense impression on the Greek secular media. The journalists call the number of those willing to venerate the relics “unprecedented” and they are trying to explain the reasons for this phenomenon. 18th-century Cross stolen from a Church in West Kazakhstan
It has been reported that the robbers penetrated the building through a window. The Orthodox Cross was the only stolen valuable object.
Comments
×