The Subtle Unity of 25% of the New Testament 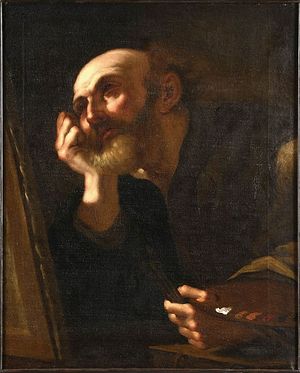 Saint Luc. Girolamo Troppa
The intentional unity of Luke/Acts is more than sequential. It is also thematic, in the sense that both works carry the same images, ideas, and preoccupations.

In Luke/Acts there is, as well, a more subtle kind of unity, of a sort different from merely thematic and more complex than merely sequential. Perhaps we may call it “organic.”

One perceives this quality of his work, for example, in his organic account of how the Church from the “little flock” to which the disciples of Jesus were reduced as he was progressively rejected by official Israel. The author discerns the growth of this rejection and indicates its actual effects on Jesus’ relationship to his disciples.

Thus, in the Gospel of Luke we see emerging a separate “Christian” group as a kind of “alternate Israel.” By at least halfway through the Gospel this group is becoming self-conscious as a new and distinct thing.

The developing leadership of this new and distinct group takes shape in the relationship of the Apostles to Jesus-and to one another-in the context of his changing relationship vis-a-vis official Israel. The author discerns and describes that development.

The established ecclesiastical authority we see as fully formed in the Book of Acts grows organically from the new mission of the Apostles evidenced in Luke 9. From the moment that Jesus authorizes them with “power and authority” (dynamis kai exsousia), the Apostles no longer feel themselves subject to the administration of official Israel. The boldness they manifest in the early chapters of Acts was rooted, not only in the outpouring of the Holy Spirit at Pentecost, but also in the earlier development of their relationship to Jesus and to one another.

In other words, the Evangelist appears to “read” the events narrated in the Gospel “through” the lens of the Acts of the Apostles. From the full fruit he is able to trace the earlier growth of the plant

One suspects that, in discerning that development, Luke was aided by his opportunities to speak with individual Christians in the Holy Land.

In pursuing this path to his narrative, the author of Luke/Acts is very distinctive among the New Testament writers.

This organic stricture in Luke/Acts has a permeating quality discernible in other ways. Take, for instance, the story about Herod that follows immediately the account of Jesus endowing the Apostles with “power and authority.”

The author, adhering to the sequence established in Mark 6, inserts a story about Herod between the mission of the Apostles and the multiplication of the loaves. But how differently!

Whereas Mark deftly uses his long account of Herod’s beheading of John the Baptist to indicate the significant interval between the sending of the Apostles (“So they went out . . .”-6:12) and their return

Luke has in mind a completely different purpose, conveyed in a peculiar organic narrative:

First, Luke had already removed John the Baptist from the story back in 3:19-20. Indeed, he removed John so thoroughly that the Baptist is not even mentioned in the account of Jesus baptism (2:21-22)!

Second, Luke joins this story of Herod to the things (ginomena panta—9:7) the dispersed Apostles are doing. This conjunction ties the present account to the narrative in Acts, which further extends the relationship of the Apostles to Herod’s family.

Third, in the introduction of Herod at this point in the Gospel, Luke prepares for Herod’s later appearance at Jesus’ trial (23:6-12). He does this in a curious way: He takes various popular assessments of Jesus (“Elijah” or “one of the old prophets”) and makes them rumors in the Herodian court. In portraying Herod as “weighing” (dieporei) these popular interpretations of Jesus, Luke likely relies on the witness of Johanna, who was tied to the Herodian court (cf. 8:3; 13:31).

Luke ends the account with the comment that Herod wished to “see” Jesus, thus setting up the later trial scene, when the king does see Jesus. Holy Scripture and the Church
New Hieromartyr Hilarion (Troitsky), Archbishop of Verey
The following article was written in 1914, when St. Hilarion was an archimandrite and a professor of the Imperial Moscow Spiritual Academy. Its message is especially pertinent for our times, when there is widespread confusion and ignorance about the true nature of Christ’s Church and about the right approach to Holy Scripture. It can provide invaluable help to Orthodox Christians in understanding their Faith more deeply, and in defending and giving an account of it when confronted with heterodox — especially Protestant — claims.