My Freedom in Prison

A Conversation with Archbishop Jovan of Ochrid (Vranishkovsky)

“We learn the most from what we have experienced ourselves; and it’s not important whether it brought us pain or joy. Before the mystery of life, the one who looks the most serious and responsible is the one who accepts life as joyful sorrow,” says Archbishop Jovan, imprisoned for a number of years in Idrizovo.

“Why did you betray us, priest?” was what the policeman asked Archbishop Jovan (Vranishkovsky) in Skopje’s Izidrovo prison, letting him know how little he respects his ecclesiastical rank and what he thinks of his mission, which Archbishop Jovan considers his life’s work. This mission is to return the faithful of Macedonia to unity with all the other Orthodox Churches.

Archbishop Jovan was once consecrated (the youngest bishop at the time) in the uncanonical Macedonian Orthodox Church (MOC), and later became Metropolitan of Veleshko-Povardar. From that moment, in 2002, he was the only Macedonian hierarch who responded to the call by Serbian Patriarch Pavle to return to canonical unity with the Serbian Orthodox Church, and legal processes began against him. He was sentenced for “self-rule,” “inciting religious and national strife,” and embezzlement. Nevertheless, the policeman did not ask him about the first, second, or third counts. He just asked him straight out: “Priest, why did you betray Macedonianism?”

If you read this episode in the book by Archbishop Jovan, Freedom in Prison, you get the impression that the Macedonian policeman was not particularly interested in hearing an answer. But Archbishop Jovan answered that he did not betray “Macedonianism” by taking a step that he is convinced will return the Orthodox Church of Macedonia to the boundaries and unity with all the rest of the Orthodox Churches. Because of his mission, he has become one of the rare bishops—if not the only bishop—in twenty-first century Europe who has been to prison for his religious convictions. It is no secret that he was offered pardon of all his accusations if he would only leave Macedonia. This is sufficient proof that they were groundless, and shows how determined Archbishop Jovan was to remain in his own country, with his own convictions. In early February (of 2014), Archbishop Jovan was released on probation after over two years in prison.

“Even in my student years I experienced pain and great concern over the fact that the Church in my fatherland is in schism from other Local Churches. When I was chosen bishop of the MOC, which was in schism, in my homily on the day of my consecration I promised to do everything I could to heal the schism in the Church of the Republic of Macedonia. Therefore, my intention to stand up for unity with the Church was not unknown or unplanned,” said Archbishop Jovan in his interview with Politica news. 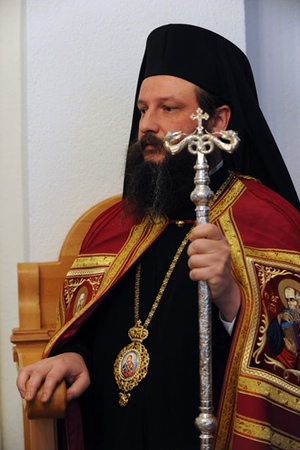 —Your Eminence, was it hard to accept the accusations made against you by the Macedonian court?

—If I were to say that it was hard for me I would be acting insincerely. After all, it seems that I quickly recognized the need to make some kind of sacrifice in order to restore unity on an ecclesiastical basis alone. From the very beginning, unity in the Church has been restored only through sacrifice—first of all through the sacrifice of Christ Himself as the Protomartyr, and then also through the sacrifices of many martyrs and confessors of Church consciousness.

—What are your meetings with Macedonians now like now? Do they still ask you, “Why did you betray us?”

—Only people who are far from the Church, and those who have the tendency to ask such questions out of political motives, in the form of a statement and declaration, and not at all out of a desire to begin a dialogue and receive an answer. In my opinion (which may be partial because it is after all my personal opinion), after I had served my sentence, people in Macedonia practically stopped asking me that question. It is as if my time spent in prison answered it for them. What they have seen is enough for people: I acquired nothing for that supposed “betrayal.” They saw that not only have I no personal interest, but to the contrary, I have sustained a definite loss. Therefore, they themselves come to the answer to that question; they understand that this is all a matter not of betrayal or lack of patriotism, but of the desire to resolve a long-standing problem.

—Describe a day in prison for you.

—When we are talking about prison norms, many are usually expecting to hear that there is at least some elementary regime or discipline established there. Most people think that prison life goes on like in the western films. But in Izidrovo prison in Skopje, things not only are not that way—I would even say that everything there is the other way around.

The daily schedule begins with wake-up time, but no one gets up at the prescribed time. Prisoners can sleep unbothered through entire days, because they have nothing else to do. All prison industry organized at one time by socialist Yugoslavia has been closed for a number of years. Out of 1700 prisoners (that’s how many there were at that time), only thirty worked—those who prepared and distributed food. There was no work for other prisoners. That is why the prison administration preferred that they sleep as long as possible, because when they wake up they cause problems.

I tried to organize myself in that chaos, but I can’t say how successful I was in this effort. In any case I did try to rise early, because the early morning is considerably more tranquil and peaceful, and I could read or write a little. All the books that I brought to read had to be approved by the prison administration. Books in foreign languages took longer to get approval. But I waited the longest for them to return a formatted copy of the second, expanded publication of my book, Freedom in Prison. While I was in preliminary imprisonment—it was very long, more than a year and six months—we had a walk once a day for forty minutes; in prison the walks are much longer, but no more than two hours. As for newspapers, the prison authorities had stopped purchasing them several years earlier due to lack of funds, and we read only those newspapers that visitors brought to the prisoners.

—I was in a cell with thirty-nine other prisoners. The room was rather large, but despite its size the presence of so many people within four walls is torturous for anyone. If you can imagine that each man would talk at least five minutes a day, then altogether this would make 200 minutes, that is, three and a half hours during the course of a day. That is to say nothing of the noise arising from other sources. In a room of forty prisoners there were over ten televisions. Often each television was tuned to its own channel. Well, you can imagine how they watched those televisions.

—How did the other prisoners treat you?

—You know, I am already an experienced prisoner, and didn’t arrive yesterday. If you add up all the time I spent in prison beginning from 2005 to 2015, it would be no less than five years. So my experience gave me a certain advantage… I am joking of course, but to be honest I never had any problems with the other prisoners. They behaved themselves very decently with me. Naturally there were problems here and there with the prison guards, who ordered provocations against me. But this cannot be called unbearable. The prisons in Macedonia have been since recently under observation by many European human rights organizations, and therefore neither the administration, nor the guards can treat the prisoners completely despotically, as they did before. On the other hand, there were many prisoners who wanted to talk to me. There was no possibility to organize divine services; the prisoners do not confess or receive Communion, but there were opportunities for talks, and this brought me joy.

—Were you able in the prison to fulfill the confession of your faith?

—No, only partially. Even though the Constitution of the Macedonian Republic guarantees religious rights to every person, including prisoners, in the prison there is no way to really put this into practice. There are no rooms specially prepared for this, never mind that there still are no churches, no place for people of other religions to do their services. Now that it’s all behind me I can reveal that I was secretly brought the Holy Gifts, so that I could receive Communion in prison. The only thing I could do was pray, but I mentioned earlier what the conditions were like for this. Unfortunately that is how it was, and I don’t think I need to be silent about this.

—As your brothers from the Orthodox Archbishopric of Ohrid have indicated, Izidrovo prison is overcrowded; there are considerably more prisoners than its size would allow. Was there a place for solitude in that “anthill?”

—There is practically no place for solitude there. At that time there were 1700 people in a prison that was built for 700. In the cell where I lived there were three-story bunks. It is hard enough to climb into and get out of the second level, never mind the third. Nevertheless, sleeping on the third level was a privilege, because some of the prisoners did not even have a bunk. Many slept on the floor. In such conditions it is impossible to achieve the true aim of the punishment; after all, punishment does not consist simply in living in poverty. Under those conditions there can’t be any notion of correction. I repeat and am entirely sure that prison in the Republic of Macedonia beats everything for senselessness. A prison organized like this brings harm to the government, society, and many families; and of course to the prisoners themselves. Prison in principle should demonstrate the strength of the state, but in the case of Macedonia it demonstrates only weakness and infirmity.

—Would you gladly forget Izidrovo and everything that happened to you there, or is there after all something that might be beneficial, if only as a memory?

—Christians should not try to forget things. They should only try to forgive. Pushing aside those negative events that are now history is what people want to do who do not understand life as a struggle. History is the best teacher. We learn the most from what we have experienced ourselves, and it’s not important whether it has brought us joy or sorrow. I consider that before the mystery of life, the one who looks the most serious and responsible is the one who accepts life as joyful sorrow. And so I think the memory of these prison woes is beneficial—of course, not for the sake of woe alone, but for the sake of the joy that goes along with it. Those who have experienced prison know what joy I am talking about. Archbishop Jovan of Ohrid arrives in Russia
On February 8, 2015, on invitation of His Holiness Patriarch Kirill of Moscow and All Russia, Archbishop Jovan (Vraniskovski) of Ohrid has arrived in Russia in order to undergo a medical treatment.