The Ukraine needs its “own” Church, Petro Poroshenko says

The Ukrainian President Petro Poroshenko believes that a “Local Orthodox Church” should be established on the territory of the Ukraine and relies upon the support of the Ecumenical Patriarch in this respect. 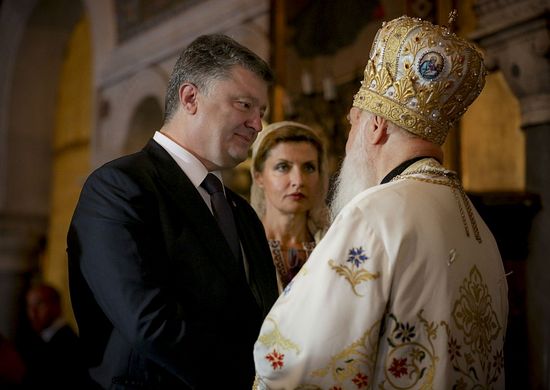 P. Poroshenko with the pseudo-Patriarch Philaret Denisenko at the St. Vladimir’s Cathedral: photo by Podrobnosti.ua

“Today we thank the Hierarchy of the mother Church of Constantinople for its assistance in the establishment of the Ukrainian Local Orthodox Church in our country, we rely on the prayers and hope for the support of the Ecumenical Patriarch,” said Poroshenko on Tuesday at a meeting of the state leaders with members of the All-Ukrainian Council of Churches, reports RIA-Novosti.

“Nearly every independent Orthodox state has its own independent Autocephalous Church … Why should the Ukraine be different? Why should we be an exception to this rule? As the President and head of the state, I assure that the state will not resort to any kind of violence or pressure – we must cherish the interfaith peace as the apple of one’s eye,” he added.

In June this year Metropolitan Onufry of Kiev and All the Ukraine appealed to Patriarch Bartholomew I of Constantinople, asking for an explanation: why were his hierarchs involved in activities (without the UOC MP’s authorization) in the Ukraine – “the canonical territory of the Ukrainian Orthodox Church, without consent of the Church Hierarchy of UOC MP?”

Furthermore, it has been reported that Petro Poroshenko attended a church of the so-called “Kyiv Patriarchate” on the Day of Baptism of Russia. None of the representatives of the Ukrainian governmental authority attended the festal Divine Liturgy, celebrated on that day by Metropolitan Onufry at the Kiev Caves Lavra.

Concerning Petroshensko’s promise of non-violence, the experience forceful seizure of UOC MP churches in the Ukraine recently show rather convincing evidence that the President is doing very little to prevent violence. Metropolitan Anthony of Boryspil and Brovary: “People are beaten up, kicked out of churches”
Metropolitan Anthony of Boryspil and Brovary, chancellor of the Ukrainian Orthodox Church of the Moscow Patriarchate (UOC MP), has cited the occurrences of open aggression by the so-called “Kyiv Patriarchate” against UOC MP, its faithful and clergy.
Comments

Sally Iloff8/3/2015 3:02 am
Porosshenko received an order to instigate revot in the Ukrainian Church by overseas. He listen idiot, follow idiots, push idiots to make idiotisms. If Ukrainian Church and nation follow this idiot one day will finish in the pit of idiots. Porosshenko is very contemporary event in the new Ukrainian history, as very contemporary and traceless will be his overseas mentors. The Ukrainian Orthodox Church is part of the body of Christ and one of the Brides. The church leaders should abstain what Porohenko demands, and follow the 1800 years tradition of the entire Orthodox Church. In other way for years the entire Ukrainian nation will suffer till come back to the proper cannon. It is proven fact what I say here!
×