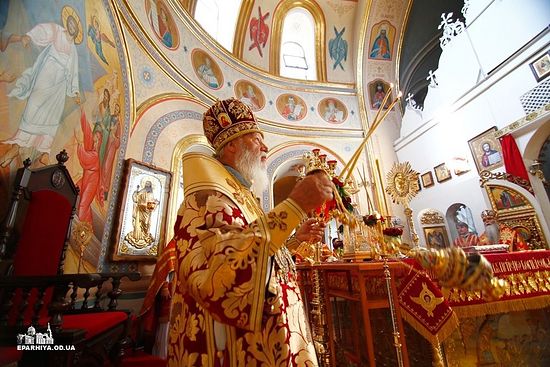 Metropolitan Agathangel of Odessa and Izmayil together with other leaders of Christian churches of Odessa has called upon the local authority to prevent holding of the “pride parade” that was planned by the city’s LGBT-community, reports Pravlife. To what extent the authorities heeded his call or acted on exclusively on their own judgment is not known, but the parade was in fact banned.

“Since the city administration has given its permission to hold a gay parade as part of the “Odessa – Pride 2015” festival on August 14-16, we the leaders and representatives of Christian churches of Odessa believe it is our duty to react and to express our clear stand on this matter (shared by all churches of Odessa),” the appeal, sent to the Mayor of Odessa Gennady Trukhanov, reads.

The Odessa religious leaders stress their support of the traditional family values, which mean union only between a man and a woman. The signers of the petition are convinced that public events organized by supporters of same-sex relations undermine the foundation of family and marriage, while a society that accepts homosexuality will inevitably die out.

“Homosexuality kills true love and gives rise to animosity, it leads to an inevitable personal degradation and is a source of many diseases, including incurable ones. Homosexuality is a sin,” the authors of the document note.

That is why the Odessa religious leaders consider that holding of a gay parade would be “inappropriate, beyond common sense, and dishonor of the city’s reputation”.

“We realize that the views of the LGBT-community are their personal choice. However, the propaganda and imposition of anti-Biblical and anti-traditional beliefs are intolerable and lead to the destruction of our society,” the Church representatives accentuate.

“In accordance with the above-mentioned, we address you with the request to prevent the announced event in Odessa in order to preserve peace among the residents and guests of our city,” the document’s authors said in conclusion.

Copies of the document signed by Metropolitan Agathangel and other Odessa’s religious leaders were also sent out to the Odessa region’s Governor Mikheil Saakashvili, head of the Security Service of the Ukraine Vasily Gritsak, and chief of the Odessa regional police Georgy Lordkipanidze.