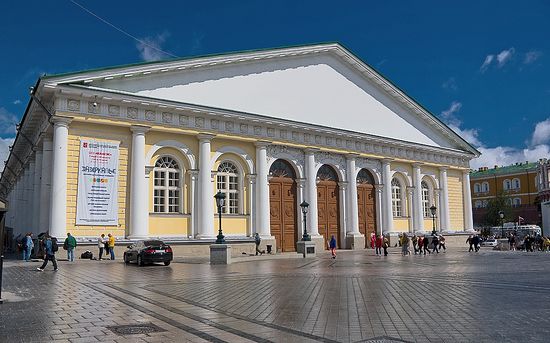 On Friday evening, Radio Free Europe reported that an Orthodox activist group had smashed sculptures by Soviet Artist Vadim Sidur that were on exhibition in Moscow’s Manege exhibition hall. Interfax Religion, from which RFE gathered its information, referred to Dmitry Tsorionov, known by the nickname Dmitry Enteo, and his group called “God’s Will” as “radicals”. Tsorionov and his group acted without any support or backing by the Russian Orthodox Church.

The organizers of the art exhibition at the Manege exhibition hall in Moscow, have filed a report on the incident with police and expect the damage to be evaluated.

"We filed a report yesterday. The damage caused is so far unknown. Police have seized four linocuts that were damaged, and we are waiting for an expert to evaluate the damage," Yelena Karneyeva, a spokesperson for the Manege association, told Interfax on Saturday.

The exhibition is working as usual now, she said.

The Interior Ministry department for Moscow told Interfax on Saturday that police had opened an inquiry into the incident.

Interfax had reported earlier that several activists led by Dmitry Tsorionov (Enteo), the leader of the Orthodox movement God's Will, had disrupted an exhibition called “Sculptures We Don't See” at Manege on Friday evening. The attackers damaged several artworks, claiming that the exhibits insulted the feelings of true believers.

Although RFL reports that Tsorionov is a “well-known Orthodox activist”, the Russian Orthodox Church dissociates itself with the controversial activist, and supports all efforts by law enforcement agents to bring them to justice for their actions. 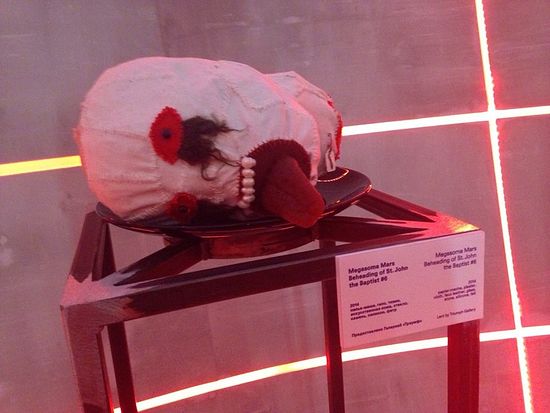 One of the "exhibits": a blasphemous effigy of the head St. John the Baptist.

At the same time, spokesmen for the Church support believers’ rights to peacefully protest any flagrant disregard for their religious sensibilities and take legal action against those who incite religious hatred. Russian law has for a number of years now forbidden the desecration of symbols revered by both believers and non-believers, and this law has been more stringently enforced since the “Pussy Riot” debacle.

Church spokesman Archpriest Vsevolod Chaplin stated that, “Legality must be enforced in all things. If Tsorionov broke the law, let him answer for it in all severity. But the law should also be observed by those who organize the exhibitions,” he said. Tsorionov himself said that he had not damaged any sculptures, only “a dish and some pieces of linoleum.”

Fr. Vsevolod said that he had not seen the exhibition but that, “if they desecrate an image of the Crucifix, then it should have been determined as the exhibition was being organized whether or not it desecrates a symbol revered by [Christian] believers…

“It is bad when someone bursts into an exhibition hall and makes a pogrom, but it is just as bad when things that that are held sacred by Christians, people of other religions, or those of no religion at all are desecrated. We need to finally get to a point where neither are happening—otherwise this conflict in society will continue to grow,” said Fr. Vsevolod Chaplin in an interview with Interfax. I admire their courage. But I am not Charlie Hebdo

I admire their courage. But I am not Charlie Hebdo
Charlie Hebdo is the epitome of what Western culture has become: nihilistic, pseudo-pornographic, and disdainful of the idea that anything at all can be considered sacred.