Ukrainian Orthodox priest is accused of desecration of national symbols 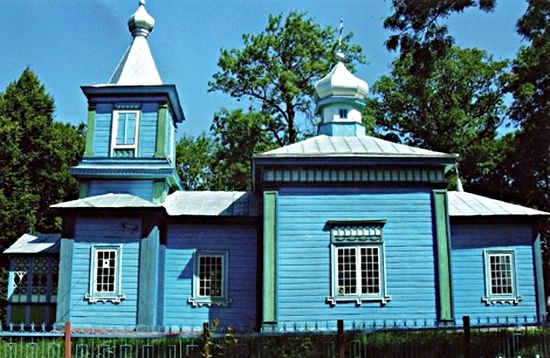 Archpriest Vladimir Greben, Rector of the Orthodox Church of Nativity of the Mother of God in the Verbichno village of the Turiysk district of the Ukraine’s Volhynia region, has been accused of “desecration of the national symbols”, reports Pravlife.org. The priest allegedly ordered to paint over the Ukrainian state emblem on the church gate. Deputy of the Volhynia regional council Alexander Pirozhik (the All-Ukrainian Union “Svoboda”) appealed to the public prosecutor’s office and the Security Service of the Ukraine with the request to look into the “provocation”.

According to Archpriest Vladimir, provocations in Verbichno indeed took place and the priest has already reported them to the law-enforcement agencies. The life of the Orthodox community had been peaceful until several “activists” appeared; one of them intends to run for chairman of the village council this autumn. A month ago, the priest relates, these activists (it is the custom with those who seize churches) organized an assembly in the village in order to discuss the matter of jurisdiction of the Church of the Nativity of the Mother of God, but there were no legal consequences of this.

The painting over of the national emblem of the Ukraine was merely a scheduled repair of the fence round the church territory: the fencing was repainted in blue and during the works the upper yellow-blue plank on the gate was covered with a new layer of paint. Will the law-enforcement officers see a crime in this? It remains to be seen. According to the Pro.church.ua portal, there was no image of the national emblem on the church gate.

On the very day when respective “loud” publications appeared in the Volhynia regional press, an assembly was held in Verbichno regarding a reformation of the village council. The activists took advantage of the opportunity and tried to give the discussion another turn: regarding the church jurisdiction; but the community was not interested in their initiative.

According to Fr. Vladimir who has served in this village for 38 years, the new Church-political group of activists is closely linked with the All-Ukrainian Union “Svoboda” (“Freedom”) whose representative voiced the “sensational” request at the session of the Volhynia regional council on August 14, 2015.

The Church of Nativity of the Mother of God was built in 1886. It is an architectural monument and, obviously, is another target of initiators of seizures of canonical Orthodox churches.