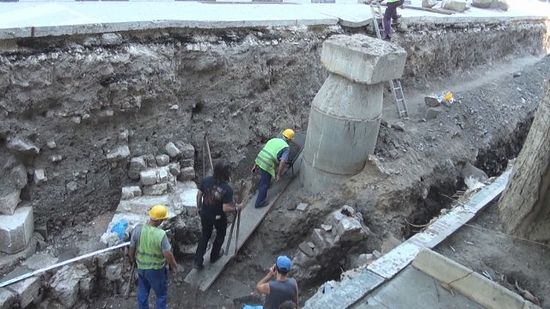 The ruins of a medieval cathedral of the Bulgarian Patriarchate from the time of the First Bulgarian Empire (632/680 – 1018 AD) have been unearthed during the rescue excavations of the ruins of themedieval city of Drastar, known as Durostorum in the Antiquity, in today’s Danube city of Silistra.

The archaeologists working on the excavations during the ongoing rehabilitation of the water supplyand sewerage network in Silistra have described the newly found cathedral which is a basilica as “one of the top five temples in Bulgarian archaeology”, reports the private TV channel bTV.

The discovery of the Drastar cathedral of the Bulgarian Patriarchate, which dates back to the 10thcentury AD, has come as a surprise to the archaeologists excavating the ancient and medieval ruins in the Danube city of Silistra because the ruins of one cathedral of the Bulgarian Patriarchate from the same historical period were already found 25 ago; they are just 90 meters away from the site of the new find.

Archaeologist Prof. Georgi Atanasov from the Silistra Regional Museum of History has commented, however, that ever since Early Christian times it was typical for bishoprics to have two temples.

The First Bulgarian Empire formally adopted Christianity as a state religion in 865 AD fromByzantium, after a protracted battle between Rome and Constantinople over who would convert theBulgarians. In 870 AD, the head of the Bulgarian Orthodox Church was granted the rank ofArchbishop.

In 917 AD, following his overwhelming defeat of the Byzantines in the Battle of Anchialos, the Bulgarian Tsar Simeon I the Great (r. 893-927 AD) is believed to have declared the head of theBulgarian Orthodox Church a Patriarch. The title, however, was recognized by the Byzantine Empire after Tsar Simeon’s death in 927 AD, under his son, St. Tsar Petar I (r. 927-969 AD). Thus, the Bulgarian Patriarchate itself had its inception at the beginning of the 10th century AD.

As the current archaeological digs in Bulgaria’s Silistra are rescue excavations, the newly foundPatriarch’s basilica from the medieval city of Drastar (Durostorum in Roman times) will be fullyexcavated, conserved, and reburied in anticipation of future archaeological projects “with solidfunding”.

In addition to Silistra’s second 10th century cathedral of the Bulgarian Patriarchate, thearchaeologists have discovered over 30 medieval graves which are yet to be fully examined.

“The ratio of adults to children [in the graves] is probably 50:50 which is telling about the high rates of child mortality at the time. It will not be up to anthropologists to determine the gender and age of the buried people, any malformations and diseases they suffered from, etc,” says archaeologist Nikola Rusev from the Ruse Regional Museum of History who also taking part in the excavations in Silistra together with his colleague Varbin Varbanov.

Despite the impressive archaeological discoveries in Silistra over the past few months, thearchaeologists’ priority are the rescue excavations alongside the construction works which has put them on a hectic schedule, and which means that for the time being the newly unearthed structures will not be exhibited in situ.

About 75% of the construction works for the new water supply system in Silistra are located in the Archaeological and Architectural Preserve “Durostorum – Drastar”; the digs reach a depth of 4-5 meters, which allows the archaeologists to discover important artifacts and archaeological structuresliterally every day.

Several archaeological structures uncovered in the previous stages of the rescue excavations have already been re-buried which has understandingly sparked outrage on part of local development activities who have criticized both the local and the central government for its failure to preserveSilistra’s unique historical, cultural, and archaeological heritage, and to use it to boost tourism.

The Ancient Thracian and Roman city of Durostorum (Dorostorum) – known as Dorostol or Drastar (Drustur) during the periods of the Bulgarian Empire in the Middle Ages – is the precursor of today’s Bulgarian city of Silistra. It was originally founded as an Ancient Thracian settlement on the Lower Danube. In 29 AD, the Romans built there a fortress keeping the settlement’sThracian name of Durostorum (or Dorostorum). After his victories wars over the Dacians north of the Danube, Roman Emperor Trajan stationed the elite Claudius’ 11th Legion – Legio XI Claudia – at Durostorum, and the fortress remained its permanent seat until the demise of the Roman Empire. In 169 AD, during the reign of Emperor Marcus Aurelius (r. 161-180 AD), Durostorum was made a Roman city – a municipium. Between the 2nd and the 4th century AD, it was a major urban and military center of the Roman Province of Moesia Inferior (later divided into Moesia Secunda and Scythia Minor), and amajor Roman stronghold against the barbarian invasions. The earliest 12 Christian saints from the territory of today’s Bulgaria are Roman soldiers executed in Durostorum during the Great Persecution of Emperor Diocletian between 303 and 313 AD, including St. Dasius and St. Julius the Veteran. In 388 AD, today’s Silistra became the seat of a Christian bishopric. Roman general Flavius Aetius (391-454 AD), who is known as “the last of the Romans” for his army’s victory over the Huns in the Battle of the Catalaunian Plains in 451 AD, was born in Durostorum. During the barbarian invasions of Sarmatians, Goths, Huns, Avars, Slavs, and Bulgars the city was ransacked several times. It was rebuilt during the reign of Byzantine Emperor Justinian I the Great (r. 527-565 AD).

The Slavs settled in Durostorum around 590 AD, and named it Drastar (Drustur). The city became part of the First Bulgarian Empire (632/680 – 1018 AD) around 680 AD. Bulgarian Khan (or Kanas) Omurtag (r. 814-831 AD) is known to have built there a large imperial palace known as the Danube Palace of Bulgarian Khans where later Bulgarian Tsar Simeon I the Great (r. 893-927 AD) resided in 896-897 AD. In 895 AD (during the Bulgarian-Hungarian War of 894-896 AD), the Magyars(Hungarians), allies of Byzantium, besieged the Bulgarian army under the personal command of Tsar Simeon I the Great in the fortress of Drastar but were repulsed. The next year the Magyars were decisively defeated by the Bulgarians in the extremely fierce Battle of Southern Buh (in today’s Ukraine) which eventually led their tribes to retreat to the west and settle in the region of Pannoniaessentially founding today’s Hungary.

During the later years of the First Bulgarian Empire the region around today’s Silistra was known for its rock monasteries. In 927 AD, Drastar became the seat of the first internationally recognizedPatriarch of the Bulgarian Orthodox Church, Patriarch Damyan. In 969 AD, it was captured by Knyaz Sviatoslav I of Kiev, the ruler of Kievan Rus in 945-972 AD, but two years later it was conquered byByzantium under Emperor John I Tzimiskes (r. 969-976 AD) in the Battle of Dorostolon, and renamedTheodoropolis, after military saint Theodore Stratelates. In 976 AD, Bulgaria’s Tsar Samuil (Samuel) (r. 977/997-1014 AD) regained the city until 1001 AD when it was again conquered by the Byzantine Empire.

Drastar was a metropolitan’s residence and a major fortress during the Second Bulgarian Empire (1185-1396 AD). In 1279 AD, under Tsar Ivailo (r. 1277-1280), Drastar withstood a three-month siege by the Mongols. It was conquered by the invading Ottoman Turks in 1388 AD (ca. 1400 AD, according to some sources), and turned into a major Ottoman fortress. Subsequently, Silistra has remained a major urban center in the Lower Danube region. Archaeologist Uncovers 13th Century Monastery Dining Room in Bulgaria’s Veliko Tarnovo
New archaeological structures – including what is believed to have been a monastery dining room – have been unearthed in the renewed excavations of a 13th century monastery in Tarnovgrad, the capital of the Second Bulgarian Empire, in today’s northern Bulgarian city of Veliko Tarnovo. Bulgarian Archaeologists Show Lead Cross Reliquary, Lead Icon Found In Medieval City Missionis (KRUM’S Fortress)
A lead cross, which is also a reliquary, found during the excavations of the Early Byzantine andmedieval Bulgarian city of Missionis, also known as Krum’s Fortress, whose ruins are located near today’s northeastern city of Targovishte, has been presented to the public for the first time byBulgarian archaeologists.