Cell and Chapel of St. John Maximovitch Preserved By God From Attack 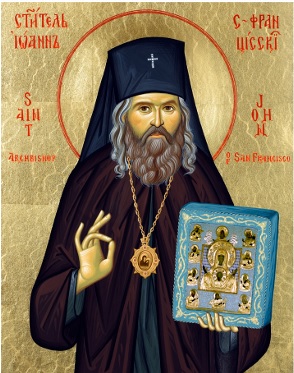 On September 16 an incident occurred at the parish of St. Tikhon of Zadonsk (ROCOR) in San Francisco, which is the former St. Tikhon of Zadonsk orphanage where St. John Maximovitch lived. A mentally disturbed man entered the building and began to throw things about. Thankfully, God preserved this holy place through the intervention of his priest Fr. Dimitri Jakimowicz, who asks for prayers for the offender, Valeriy. Fr. Dimitri writes:

"Yes, there was an unpleasant event at St. Tikhon’s house yesterday. A mentally ill man, who was also clearly effected by drugs and alcohol, showed up and began screaming profanities, got into St. Tikhon’s house, and began throwing things around. He knocked over the holy water container and the water went everywhere. He tried to destroy an icon, a very old icon of the Mother of God, but he was only able to destroy the kiot. Zoya quickly grabbed the icon before it hit the ground. I stayed in between him and the sanctuary, and in between him and St. John’s cell. Running thorough the church he knocked over some candle stands and threw the candles all over the floor. Natasha and Zoya we’re clearly and visibly very upset. The man then tried to attack Zoya, and that’s when I grabbed him and pushed him through the door and onto the stairs that lead from the sidewalk to the building. 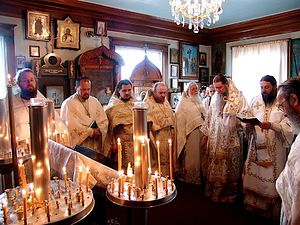 St. Tikhon of Zadonsk parish
God is merciful and granted me enough strength to subdue him without hurting him and to pin him to the ground until the police arrived. It is my firm belief that the angels assisted.This man acted aggressively and violently, he was disrespectful and rude, he said blasphemous words, but in his eyes one could see profound sadness and fear. He screamed that he would bite me! It is my observation that he is demonized. I am no hero ... I might have been a 'hero' if I had been able to 'talk him down' and not need to 'take him down' to the ground and 'sit' on him. My dear brothers and sisters, this event is heartbreaking and very sad. The ladies were shaken up and frightened, I had a bloody lip and I think he pulled some of the beard out of my face. OUCH! He tore a pocket of my cassock and tore the chain of my Priest’s cross. The three of us are all OK now. However, this poor man is not OK ... this man needs help. The man is Russian! This was not about Russo-phobia, there is no hate crime here. The worst crime is what he has done to himself. For the record: after being subdued by the police, he sat on the sidewalk, repeating, screaming: 'Father, Father!'… 'Батюшка, Батюшка!' ... 'F*** YOU!' I did not hear him spewing any anti-Russian rhetoric.

Before the onset of mental illness he was a parishioner at one of the San Francisco parishes for many years. His name is Valeriy.Unfortunately, considering the legal system, I need to press charges for assault in order for Valeriy to be able to get some effective help. I did not want to do that. I signed a complaint for property damage and vandalism, but apparently that is not enough to get him into the system so he can receive the proper attention. Tomorrow, I have an appointment to go visit Valeriy, along with his priest, Fr Phillip. Please everyone, pray for Valeriy’s troubled soul, that our Lord God grant him an effective path to mental health and a peaceful heart. And please pray for the sinful priest, Dimitri." Attack on a priest in Kiev—the Ukraine's Internal Affairs Ministry considers a political version
Investigators are considering a political motive as one of the versions of attack on Priest Roman Nikolayev, cleric of the Ukrainian Orthodox Church of the Moscow Patriarchate, in Kiev, reports RIA-Novosti. A Church in the center of Moscow attacked

A Church in the center of Moscow attacked
A group of armed vandals burst into the Church of St. Gregory of Neocaesaria on Polyanka street in Moscow on Tuesday evening.
Comments

Lorraine Kavalkovich9/20/2015 9:26 pm
Glory to God that priest and laity are well and there was no serious damage to the church. This man's mental health will improve due to the intercessions of the Mother of God, Saint Tikhon of Zadonsk, Saint John Maximovitch and the holy prayers of the priest and the faithful of the church.

Sending up prayers for Valeriy and for those who have fallen into the trap of drug and alcohol addiction. May they be healed through the prayers of beloved St. John.

Thank you Fr. Dimitri for acting so wisely. God continue to direct and protect you.

Angela9/18/2015 7:59 pm
Respectfully, he needs exorcism. Prayers that he be released from the demon that caused this situation. Lord have mercy!