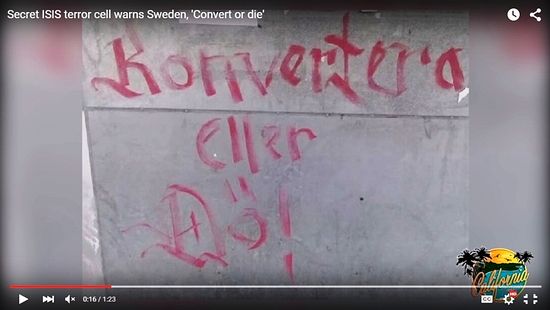 A screengrab from a video report on the new wave of persecution being faced by Christian business owners in Sweden.

On Wednesday, a report surfaced about an Assyrian family in Sweden who found the graffiti that reads "Convert or Die" on the wall of their Gothenburg pizzeria. The said family is among those who have fled Syria to escape the persecution of Christians at the hands of Islamic extremists, according to BizPac Review (BPR).

"Imagine yourself having fled from persecution in a country and then to find yourself staying next door to ISIS sympathizers here in Sweden," BPR quotes Gothenburg president Joseph Garis' statement to the Gotesborgs-Posten.

For pizza store owner Yusuf Asmar, their situation in the Assyrian district in Sweden is reminiscent of the time when Jews were being persecuted in Germany. During the 1930s, the Star of David was painted on the doors to identify Christians, Breitbart reports.

Being an Assyrian and a Christian, Asmar said he feels very uncomfortable with what is happening in the Swedish city because he knows he is one of those being targeted for persecution, the report adds.

Some buildings have also been marked with the Islamic glyph representing the letter "N" as a sign that there are followers of Nazareth (Jesus Christ) inside, the report explains.

Asmar's experience is now becoming more common in Gothenburg. The incident comes in the wake of Sweden's decision to provide asylum for Assyrians seeking safety in Northern Europe, in accordance with the country's open door immigration policy. But radical Islamists and ISIS sympathizers are taking advantage of that policy to enter Sweden, said Asmar.

For now, Swedish authorities are investigating the graffiti but are not classifying the act as a hate crime. However, police officer Bertil Claesson explained that it would be "almost impossible" to investigate the incident because they have no witnesses or evidence to work on. The Orthodox Man
Tommy "Tomas" Rydén
As a young child I used to accompany my mother to various Christian services. She had been active in the “Salvation Army” as a young woman and was still a firm believer in God. She never forced any of it upon me, she only asked if I could go to these meetings with her. World's First Openly Lesbian Bishop to Remove Crosses, Build Islamic Prayer Room in Swedish Seamen's Church
Eva Brunne, the world's first openly lesbian bishop, has called for a church in Stockholm, Sweden, to remove all signs of the cross, and instead build an Islamic prayer room in order to welcome Muslims. Several other Christian leaders in Sweden have criticized the suggestion. Ruins of an Orthodox church and remains of a Russian priest are offered for sale in Sweden
If a would-be buyer of the “Russian yard” house pays 8.1 million Swedish krona, he or she will obtain two apartments, a restaurant decorated with ancient frescoes as well as ruins (the foundation, nave and apse) of an Orthodox church on which the house is built. The remains of a Russian priest who lived 900 years ago can be found among the ruins.
Comments
×