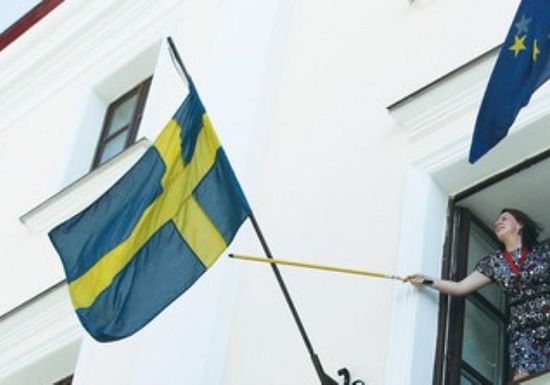 Eva Brunne, the world's first openly lesbian bishop, has called for a church in Stockholm, Sweden, to remove all signs of the cross, and instead build an Islamic prayer room in order to welcome Muslims. Several other Christian leaders in Sweden have criticized the suggestion.

Thousands of refugees from the crisis in Syria and the Middle East have been making their way through Europe into Western states. Christian leaders, such as Pope Francis, have called on parishes across the continent to open up their doors and welcome in refugee families.

Patrik Pettersson, priest of the Oscars parish in Stockholm, took issue with Brune's suggestion, however.

"The church chapel cannot reasonably be equated with prayer rooms at airports and hospital chapel[s]. The Christian church and chapels are not just any public areas," he wrote.

"The only argument Bishop Eva really put forward in support of her view is 'hospitality.' … How do you respond to that? Not much of a basis for discussion, as one colleague put it. The theological, ecclesiological, pastoral and working issues are left untouched," Pettersson continued.

Seamen's Church Director, Kiki Wetterberg, added that it's wrong for a Christian church to remove its symbols.

"I have no problem with Muslim or Hindu sailors coming here to pray. But I believe that we are a Christian church, so we should keep the symbols. If I visit a mosque I do not ask them to take down their symbols. It's my choice to go in there," she said in the Christian newspaper Dagen.

Breitbart noted that Brunne became the world's first openly lesbian bishop in the Lutheran Church in 2009, and has a young son with her wife and fellow priest, Gunilla Linden.

Sweden has been welcoming refugees not only from Syria, but also Eritreans who had initially traveled to Italy.

In September, the EU agreed to a plan to relocate a further 120,000 refugees across Europe, despite the opposition of a number of Eastern states, like Hungary, who has said the crisis is stretching their borders and resources.

Germany has vowed to take more refugees than any other nation, opening its borders to close to 800,000 people. Italian police: Muslim migrants threw Christians overboard
Muslims who were among migrants trying to get from Libya to Italy in a boat this week threw 12 fellow passengers overboard -- killing them -- because the 12 were Christians. Metropolitan Ambrosius of Helsinki Sparks Controversy by Inviting Female Lutheran bishop Irja Askola to Altar during Clergy Ordination
Archbishop Leo- Primate of the Finnish Orthodox Church has condemned the incident and has asked Metropolitan to clarify the issue before considering any measures against him.
Comments

Gunnar6/5/2021 1:02 pm
This kind of thing is widespread in many Anglican and Episcopal Churches too. Some years ago the Episcopal Church renovated St. Paul's cathedral in Boston, Massachusetts. Instead of putting a cross or Christian symbol above the main entrance, they opted for a sculpture of a nautilus shells, because it "represents growth and the spiral dance of life...." and doesn't offend non-Christians.

Antony from India5/17/2020 2:57 pm
what is wrong with this Europe? Don’t they have brain cell in their freeking head! The days are not far when we hear horrible news about these outsiders dragging you out of your own houses and doing unimaginable things to your women and children! Woe to you ungodly Europe! Let your knees be bent for the wrath of God

Robin Hood12/29/2019 9:20 pm
This woman also states that she feels closer to muslims than to Christians, because Christianity seems to belong to right-wing people, rather than liberals. Wow! Any trace of such a standing in the Bible? This is outrageous, and it is also up to the Swedish Christians to try and clean their churches from this weed.

James Abeiku Dadzie9/9/2019 7:01 am
God have mercy! This is an abominable act indeed. She should not be in ministry in the first place let alone make such drastic decisions. Jesus did speak about things of this nature happening in the last days. He said that if the last days were not cut short, even the very elect will be deceived. My hope and prayer are that those who have received Jesus Christ will continue to run the race set before us and never deny Him. These are truly the last days because all the signs point to it. Even the pope has the audacity to sign a joint document with the Muslim world essentially saying both religions worship the same God. How is he so deceived? Muslims do not even believe in the virgin birth, the Sonship of Jesus Christ, His divinity etc so how can he be equally yoked with them? They certainly consider us infidels alongside the Jewish people. God have mercy on us and save His people in these last days because even the so-called leaders are shockingly deceived.

Davida Carter-Burns12/17/2018 8:10 am
This is what happens when a practicing homosexual is made a leader in the church. They have moral and ethical issues. A "bishop" wanting to remove crosses from a church is not a bishop. That is an anti-Christ. A false teacher. A wolf in sheep's clothing. She needs taken out immediately. Christians and Muslims do not pray to the same God therefore Muslims do not belong in a Christian church. A Muslim shouldn't even feel the desire to enter a Christian church in the first place. By taking out the crosses she is taking out Jesus. Christianity IS Jesus Christ. HE is the church. She sends the message "Come on in. Jesus isn't here to bother you." Her argument is weak. She is a lost soul.

Mark Citadel10/8/2015 5:42 pm
This is an ABOMINATION! It is time something was done about Christianity's pretenders.
×