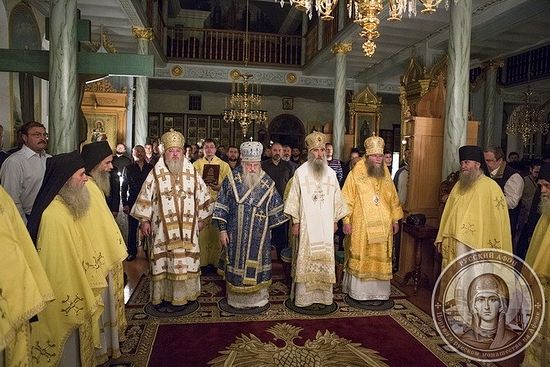 The All-Night Vigil and Divine Liturgy were celebrated on October 21 and 22 at the Church of the Intercession at the Russian Monastery of St. Panteleimon on Mount Athos by Metropolitan Yevlogy of Vladimir and Suzdal, Metropolitan Sergy of Ternopol and Kremenets, Metropolitan Kirill of Stavropol and Nevinnomyssk and Bishop Nil of Murom and Vyazniki.

The brotherhood of St. Panteleimon monastery of 100 monks, including those living in sketes, gathered to pray for their abbot.

Metropolitan Yevlogy read a welcoming address from His Holiness Patriarch Kirill of Moscow and All Russia to schema-archimandrite Jeremiah (Alyekhin) and the brethren.

After the Liturgy a moleben of thanksgiving was celebrated to the Lord for the 100th birthday of St. Panteleimon's Monastery's abbot.

Metropolitan Yevlogy presented Fr Jeremiah with the Order of St. Prince Vladimir Equal-to-the-Apostles, 1st class, bestowed by His Holiness Patriarch Kirill of Moscow and All Russia.

Metropolitan Sergy presented Fr. Jeremiah with the Order of Sts. Antony and Theodosius of the Kiev Caves on behalf of His Beatitude Metropolitan Onufry of Kiev and All Ukraine.

Fr. Jeremiah, who received many other awards and presents, thanked all those gathered, saying, "There is no salvation without love, while love is impossible without self-sacrifice and the cross, which is impossible without humility and patience. Patience, love and humility – these three are the path of a Christian to the Heavenly Kingdom. Never forget the first commandment of Christ. I wish you God’s help in all your good undertakings." 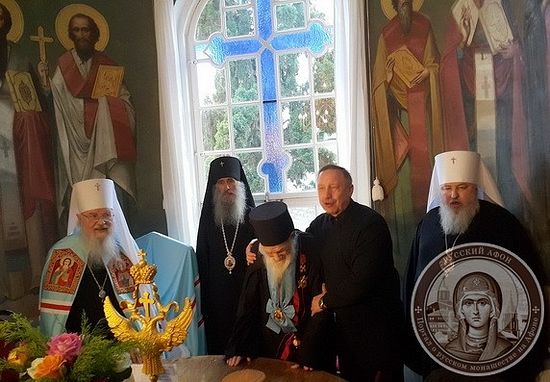