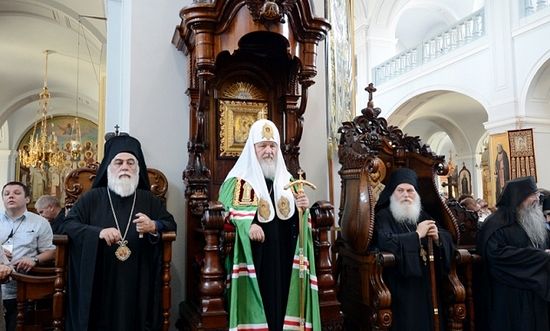 Patriarch Kirill of Moscow and All Russia plans to visit Athos in spring 2016, when the 1,000th anniversary of Russian presence on Athos is set to be celebrated.

"I hope His Holiness will visit Athos in 2016. I think it will most likely happen in spring. Of course, we will try to mark this wonderful date well," head of the Moscow Patriarchate's Department for External Church Relations Metropolitan Hilarion of Volokolamsk, told reporters in Moscow on Thursday, responding to a question from Interfax-Religion.

The metropolitan said preparations for the visit are being made and Russian monasteries on Athos are being rebuilt.

"A lot of renovation work has been done on Athos monasteries in the past few years. Additionally, we plan a series of events in Russia. There will be educational symposiums and monastic convocations to mark this date well," he said.

Patriarch Kirill visited Athos in June 2013 and, among other things, called for the rebuilding of the Xilurgu Monastery, the first Russian monastery on Mount Athos.

The first Russian monastery on Athos was founded under Holy Prince Vladimir and was called the Monastery of the Virgin the Xilurgu. It was first mentioned in writing in February 1016. This date is regarded as the beginning of the Russian presence on Athos. Metropolitan Onufry of Kiev visited Mt. Athos the day before his 70th birthday (+Photo)
The Russian Athonite monastery received him solemnly, with ringing of church bells, not only as primate, but also as an old benefactor of the monastery.
Comments

George Theodore11/1/2015 1:00 pm
Patriarch Kirill, the only man who spoke up for the Christians being slain in Syria.

All other "World leaders"?

Busy counting the Saudi money deposited in their banks,
drafting messages of condolence for the victims of the Airbus "accident", or what?