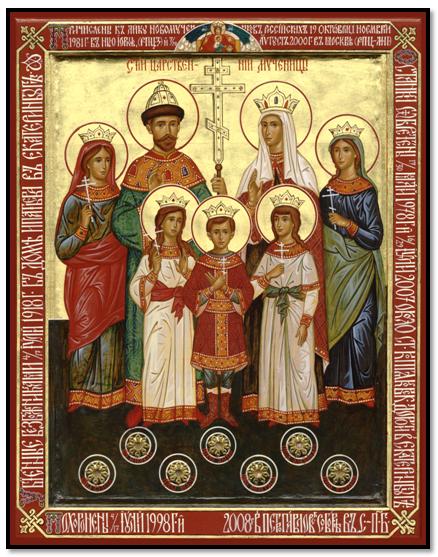 According to several articles released by Interfax-Religion the first stage of the forensic testing on the supposed relics of Sts. Tsar Nicholas II and Tsarina Alexandra has been concluded. Vladimir Solovyov, senior investigator with the main Criminalistics Department of the Investigative Committee, stated on Wednesday: "At this stage, we faced the task of identifying the skulls of Nicholas II and Alexandra Feodorovna. The studies have confirmed that they indeed belong to them. This identification has been completed.”

Additionally, DNA extracted from the alleged lower of jaw of the Empress Alexandra yielded rare mitochondrial DNA which matches that found in descendants of her grandmother, the British Queen Victoria, Markin stated.

Although investigators are already convinced that the samples are genuine, further tests will be conducted in an attempt to provide irrefutable evidence of the veracity of the remains, including comparisons with blood samples taken from the clothes worn by Emperor Alexander II on March 1, 1881, the day of his assassination, which have been kept in the State Hermitage Museum.

For its part, the Russian Orthodox Church will wait until all investigations have been concluded before making a decision about the veracity of the alleged relics. "I think we should wait for the results of these tests and then the Church will weigh all available information and will make its decision in good time," Archpriest Vsevolod Chaplin, head of the Synodal Department for Church and Society Relations, who is also a member of the working group on issues relating to the study and reburial of the remains of the tsar's family, stated on Wednesday.

The House of Romanov, headed by Grand Duchess Maria Vladimirovna who lives in Spain, hopes to become privy to the findings of the DNA investigations. Royal House lawyer German Lukyanov stated, "The Russian Imperial House has a right to become familiar with the results of the tests and all conclusions drawn by experts. We are hoping that it will happen after the investigation is completed and the criminal case is closed.”

A burial ceremony for St. Alexey the Tsarevich and St. Maria the Grand Duchess may be celebrated in February, according to Russian State Archive head Sergey Mironenko. Relics of St. Elizabeth the New Martyr May Be Included in Royal Martyrs Inquiry
As part of its ongoing investigation into the murder of the last royal family of Russia and the testing of their alleged remains, the Russian Investigative Committee has stated that samples of the relics of St. Elizabeth the New-Martyr, the sister of Tsarina Alexandra and herself a Grand Duchess, may be delivered from Israel to Moscow to aid in establishing the identity of the remains found near Ekaterinburg alleged to be those of the Royal Martyrs.