Christ is Our Peace

We have all seen and heard about this barbaric, horrific, and frightening terrorist action that took place in Paris on Friday. Three teams of men, disciplined in dealing death, planned this attack with the help of others and managed to evade an enormous security apparatus that blankets most of the Western world. Notably, at least one of them deviously managed to slip into Europe under the guise of a refugee. Perhaps in the coming days, we will find out more about how this crime came about: who else was involved? Who financed it? Where did they train? But at the same time, the part of story that concerns those who were out on a cold November night for dinner, a concert, a stroll, or a soccer game must also be told. The victims are worthy of our remembrance and our consideration today, and not those who appear strong with weapons that bring death or those who appear mighty and sow fear, confusion, and further enmity.

The victims of this tragedy once again compel us to think on Christ, on His Gospel, and to turn our gaze to Him. Only then can we also bear to look on the dead and the wounded of this November night, and also the dead and the wounded, the marginalized, the outcasts of every age, all those along the side of the road—sick, wounded, destitute, ill-afflicted, dead, and dying—that we would prefer to pass by. Only with Christ can we see them, as the Gospel tells us today, as our neighbor, those whom we must love with the same ferocity, the same devotion, the same ardor that we love God. Consequently, we mourn at the death of our neighbors. We anguish over the wounded. We pray that God receive the dead into His kingdom and that He restore the injured to health. To those who appear strong in their might on Friday, we call out their brutality as senseless and weak. 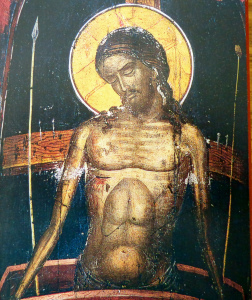 Extreme Humility (16th c, Meteora, Greece)
Christ’s own death provides us with the fundamental way of understanding the world according to the Gospel. It is what the Apostle says: “God chose what is foolish in the world to shame the wise, God chose what is weak in the world to shame the strong, God chose what is low and despised in the world, even things that are not, to bring to nothing things that are, so that no human being might boast in the presence of God (I Cor. 1.27-29).”Only with Christ, in our love for Him and our love for our newly defined neighbor, will we truly live. Seeing things in this manner allows us to see past the veil of this world, past the wisdom of this world, and perceive exactly the wisdom of God, Jesus Christ, active in this world.

In the immediate aftermath of the terrorist acts, social media was abuzz with messages of hope, solidarity, and prayers for the people of Paris. One notorious statement emerged and rejected prayers from the different corners of the globe:

Please don’t pray for Paris. We’ve had enough religion for one night.

I counter this to the greatest degree I can personally muster: we do not need less religion, we need more. We need Christianity and authentic faith. We need Jesus Christ, because we need to love Him, because He our God. We need to love those around us, those who are far from us, because they are our neighbor. Neither enmity or hatred, but Christ and the peace spoken of in the Epistle today are what we, the entire world, needs.

In other words, what abides, what remains, is exactly that person spoken of in days of old: “The Prince of peace (Is. 9.6),” He “who inhabits eternity, whose name is holy.” Eternal and holy, He remains. He endures. He revives, restores, comforts, and heals us when we turn to him. Christ is our peace (Eph. 2.14), the peace proclaimed far and wide. In all our struggles, in all our affliction, in all our angst, anxiety, and uncertainty about what happens in the present and what the future might bring, Christ is our peace. When we are most vulnerable and feel we are in danger of losing everything, our Lord remains with us. 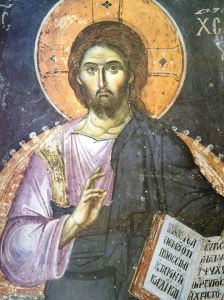 Jesus Christ (13th-14thc, Church of Protaton, Mount Athos, Greece)
Now when Paul speaks about Christ as our peace today, he is not speaking of peace as a state of quiet, personal contentment. Rather he speaks here of reconciliation between Jews and Gentiles in Christ. The resolution to their separation, alienation, and estrangement is faith in God. How are they reconciled? By faith in Christ, who “abolish[ed] in his flesh” what had separated them. He brought forward a new man, reconciling us to God through His blood and His cross. This is not merely a historical fact, or a description of a theological controversy, but exposes for us who we are in reality. We are not strangers or sojourners to the heavenly realms, and citizens of this world. No! We have access to and can be rich in the spiritual treasures, because we are “fellow citizens with the saints…members with of the household of God,” and neighbors one to another. We have been knitted and joined together as the Temple of the Living God, as the dwelling place for the God in the Spirit.