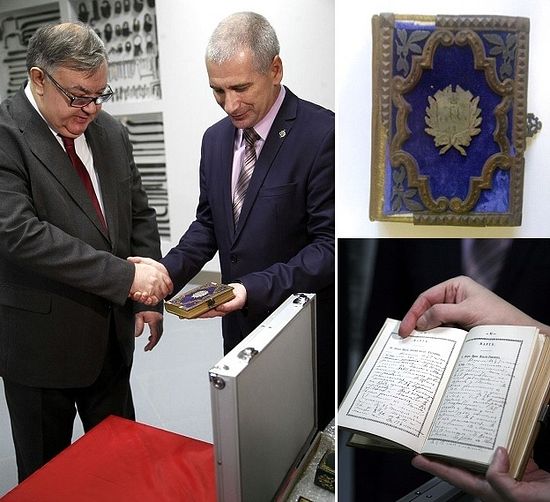 The Moscow Criminal Investigation Department recently arrested a man after he attempted to sell some rare books of “great historical and cultural value” to a Moscow dealer. Among the books were three unique volumes, including the 1864 diary of Tsesarevich Grand Duke Alexander Alexandrovich - the future Emperor Alexander III, who ruled Russia from 1881 to 1894. This sensational find, miraculously coincides with the examination of the remains of Emperor Alexander III currently being held in St. Petersburg and Moscow.

The 1864 diary contains daily handwritten entries by the future Russian emperor. On the last page, he wrote: "A Good Year." The other two volumes - dated 1888 and 1892 are calendars or day timers, with handwritten notes made by the emperor on each page.

During the investigation it became clear that the diaries originated from the collections held in the State Archive of the Russian Federation (GARF) in Moscow, but disappeared from the collections many years ago under mysterious circumstances. According to GARF Deputy Director Elena Aniskina, the diaries went missing sometime in the 1980's, however, the theft was only discovered 10 years ago.

The Moscow Criminal Investigation Department presented the diaries to Sergei Mironenko, Director of the State Archive of the Russian Federation in Moscow today. Rasputin Surveillance Shown to Have Been Inept
St. Peterburg’s Boris Yeltsin Presidential Library recently accepted a considerable collection of declassified documents from the Tobolsk State Archives. The 239 documents dating from 1914-1916 reveal the disorder in the Secret Service and other intelligence departments of the time. Of especial interest is the information on the secret surveillance of Rasputin beginning in the summer of 1915, by the order of the Minister of Internal Affairs of the suite of His Majesty, Major-General Vladimir Dzhunkovsky. Two secret agents were assigned to tail Grigori Rasputin, reporting on all his movements and on those who visited him.