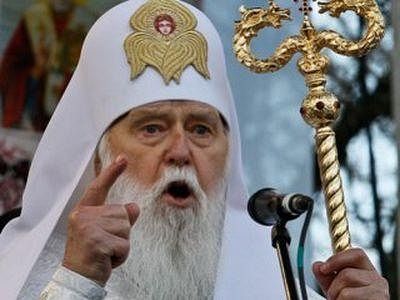 Representatives of the self-proclaimed Kiev Patriarchate attempted to seize an Orthodox church dedicated to St. Anna in the village of Kuty, in the Ternopol Region of Ukraine.

They came up to the church doors and demanded the right to celebrate divine services in turns with the community of the Ukrainian Orthodox Church. Crying out their demands, they made an attempt to enter the church by force, the UOC press service reported.

Law-enforcement officers interfered in the conflict to prevent the capture of the church. The community headed by the rector agreed to negotiate the possibility of alternate services in order not to escalate the conflict.

Meanwhile, allies of the 'Kiev Patriarchate' continue pressing on the local rector of the Assumption Church, priest Nikolay Sisonyuk in the village of Ptichaya in the Rovno Region, dropping funeral wreaths and nails in his yard in order to damage the tires of his car.

Another attempted seizure of a church and attack on priest in Kiev region
On October 5 a group of unidentified people in camouflage and with baseball bats, headed by the city council deputies Sivorko N.N., Levchenko V.G., and Salobai A.Z., attacked the Church of Holy Righteous Princes and Passion-Bearers Boris and Gleb, cut off the door locks and blocked the entrance to the church.
Comments
×