Montenegrin frauds passed a schismatic off as representative of Georgian Church

The official website of the “Montenegrin Orthodox Church” schismatic organization has published a message containing information on the arrival of the false “representative of the Georgian Orthodox Church and Patriarch Ilia II of Georgia Bishop Daniel Kiknadze” to them with an official visit. The current Montenegrin government, which is trying to bring a reluctant Montenegrin population into NATO, is also supporting a schism in the Serbian Orthodox Church. 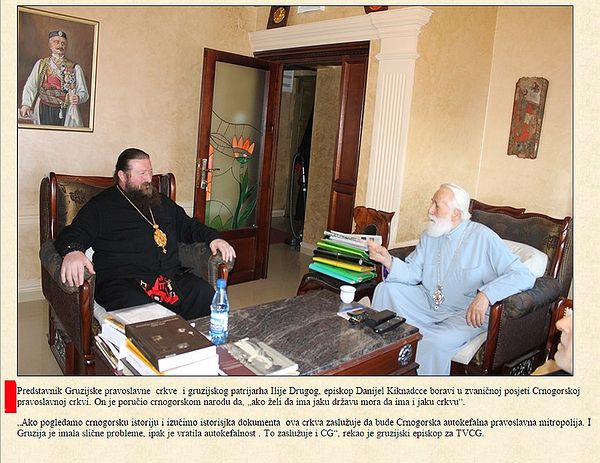 He went on, “Georgia once had similar problems, too. But, nevertheless, it managed to get its autocephaly back,” trying to compare the current situation in Montenegro with Georgia’s autocephalous Church.

However, in reality, Kiknadze currently has nothing to do with the Georgian Orthodox Church and His Holiness Catholicos-Patriarch Ilia II.

According to information from the Anti-raskol.ru (“Anti-schism”) website, during his life Kiknadze has gone through many schismatic jurisdictions and at the moment he is known as “Metropolitan of Rome, Paris and Western Europe” within the so-called “Synod of the Greek Old Calendarist Church”. Schism is the Beginning of Heresy
Archpriest Stephan Pruzhinsky

Schism is the Beginning of Heresy
Christ’s Church, the Orthodox Church, walking the path of love, is always in a condition in which it can resolve one or another intra-ecclesiastical problem through peaceful means and witness the truth to the world.

Matthew 7:1-5:
“Do not judge, or you too will be judged. For in the same way you judge others, you will be judged; and with the measure you use, it will be measured to you. “Why do you look at the speck of sawdust in your brother’s eye and pay no attention to the plank in your own eye?