A church is seized in the Ukraine's Zhytomyr region

On December 27, 2015, representatives of the “Kyiv Patriarchate”, unrecognized throughout the Orthodox world, took over the St. Nicholas Church in Kolodyanka village of the Ukraine’s Zhytomyr region. Several priests of the “Kyiv Patriarchate”, local residents along with people from other settlements took part in the seizure of the church that had been built by a community of the Ukrainian Orthodox Church of the Moscow Patriarchate (UOC MP), reported Archpriest Stephen Markevich, Dean of the Novohrad-Volynsky Transfiguration Deanery of UOC MP, to the Ukrainian Union of Orthodox Journalists. 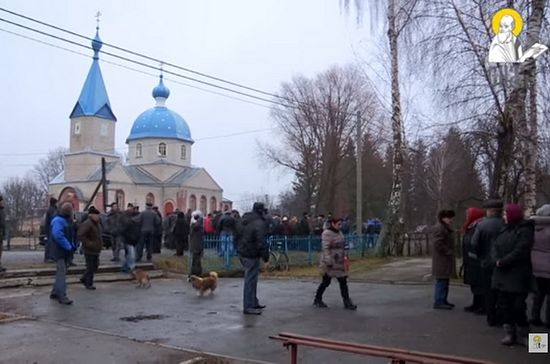 According to the archpriest, about 11.30 around 50 representatives of the “Kyiv Patriarchate” entered the territory of the church and took it over. Several dozen “Right Sector” soldiers watched what was going on.

Fr. Stephen stressed that the reaction of their parish on the church takeover would be according to the Ukrainian legislation.

He has also related that the “Kyiv Patriarchate’s” decisive actions were caused by the visit of head of the Sector for Religions and Nationalities of the Zhytomyr State Administration Alexander Pivovarsky on December 25. The latter said to the conflicting parties that a legislative resolution to the conflict would take a long time.

After that the community of the so-called “Kyiv Patriarchate”, as usual, demanded to hold “a referendum” which usually bodes a takeover of church buildings by raiders in the nearest future. The UOC MP community declined. Then the “Kyiv Patriarchate” schismatics installed their locks on the church door and on the gate of the church fence.