Metropolitan Jeremiah of Gortynos: “Our glorious nation is in decline because we have turned away from the God of our fathers”

Celebrating the Divine Liturgy on December 26, four days after the Greek Parliament had legalized same-sex “unions”, Metropolitan Jeremiah delivered a sermon to the people, reports Romfea. First of all, he gave words of consolation to Greek Orthodox families. 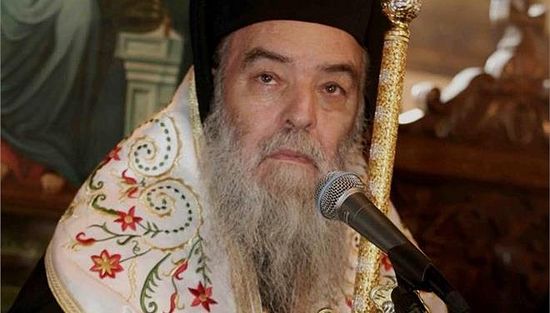 Then he spoke about “the great sin” that had been committed in Greece; that is, the legitimization of sin and depravity. The metropolitan was indignant at the behavior of the deputies from his diocese who had voted for that “abominable law”.

He called upon the Christians to share his sorrow with the deputies regarding their action, which he described as “disgraceful”. “Go to the court,” the hierarch said, “and you will hear what I will say to them.”

“But do not leave me, my Christians! Do not leave me to struggle alone. This is not only my faith and not only my motherland. This is our common Orthodox faith and our common motherland – Greece. Our glorious nation, which has enjoyed thousands of years of glory, now is in decline, because we have turned away from the God of our fathers. And the Lord will finally take His grace from us, because we are trampling Divine law underfoot and surrendering the status of law to abomination,” said the metropolitan at the end of his sermon.

The faithful, judging by their faces, were inspired by the call of Metropolitan Jeremiah to be his companions-in-arms in the Church’s struggle for faith and true virtue in Greece.

“I am going to call the deputy straightaway,” said one woman-parishioner.

We will not leave His Eminence to struggle alone, because we uphold what our ancestors taught us to cherish, and we love our motherland, the Christians said. Greek hierarchs warn that the time of persecutions has come: “We are Orthodox Greece: let us not be traitors”

Greek hierarchs warn that the time of persecutions has come: “We are Orthodox Greece: let us not be traitors”
Now that the so-called Anti-Racism Law which prohibits “discrimination” against homosexuals is adopted in Greece, it is time for the next step: to secure the legal status of “same-sex unions”. Greece will vote to extend civil unions law to same-sex couples
Greece is one of the last EU countries where gay couples cannot receive recognition of their relationship.
Comments
×