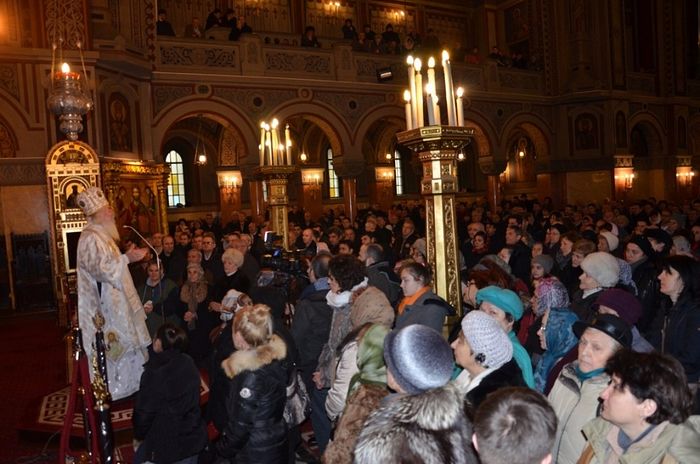 Romania’s Orthodox Church wants to change the country’s Constitution so as not to allow same-sex marriages. The initiative was first launched by the Metropolitan of Banat Ioan Selejan, at the end of his Christmass Liturgy in Timisoara. Tens of people who went to the Theophany day service at the Metropolitan cathedral in Timisoara on January 6 queued to sign for this initiative, according to local media.

Several priests from Romania’s Iasi county have rallied to this initiative, starting to gather signatures from their parishioners to support the Constitution’s amendment. After blessing houses for Theophany day (a very common tradition in Romania), they’ve also asked the people to sign in favor of amending the Constitution, so that it would only allow marriage between men and women, and not between persons of the same sex, reports local Mediafax.

Believers had different reactions to the priests’ request: while most of the elderly signed the petition, the young people were not so enthusiastic.

Representatives of the Metropolitanate of Moldova and Bucovina claimed that the priests in Iasi county gathered the signatures on their own initiative, but that their idea was not wrong. The priests need to gather half a million signatures to file for a referendum for modifying the country’s fundamental law.

Romanian Patriarch Daniel said that believers “must support the Church’s effort to protect the natural, traditional and universal family, and to resist in front of some new family models which consider that the natural woman-man union would be only one model among others,” reports Basilica.ro, the Romanian Patriarchate’s news service.

According to him, the family is in a fragile and difficult situation, as some think that the traditional family model is outdated.

“The number of those who treat marriage as a simple contract or partnership between two persons of different gender or the same gender is increasing nowadays. However, social partnerships between people can’t be classed as traditional families and any attack on its traditional identity is an artificial innovation which can’t be called natural reality,” the Patriarch said.

He believes that the Christian family not only faces an economic crisis (poverty, unemployment, emigration, and so on), but also a moral crisis (libertinism, abortion, divorce, child abandonment, domestic violence, juvenile delinquency, human trafficking) and a spiritual one (sectarianism, fanaticism, and so on).

“When God made the world, the crown of His creation was the family: the man and the woman, who have received the blessing to grow, multiply, and possess the earth,” Patriarch Daniel added.

Several European countries recognize some type of same-sex unions, among them some of the European Union’s members. Greece, an Orthodox country, adopted a law that allows same-sex civil partnerships just before Christmas last year.

However, this remains a controversial topic in Europe, including Romania where most of the people are very religious. Slovenians vote against same-sex marriage in referendum
Victory for conservatives backed by the Catholic Church, as a majority of voters in the former communist nation reject marriage equality