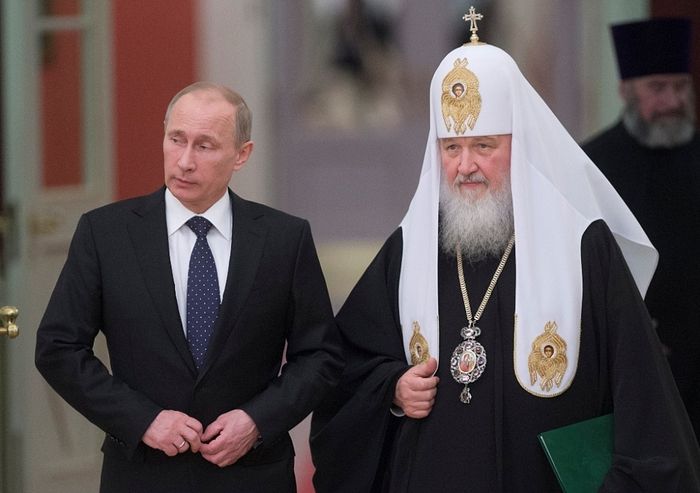 Patriarch Kirill, the head of the Russian Orthodox Church, has claimed that one of the reasons so many Muslims are joining the Islamic State is because they want to escape the world's "godless" embrace of homosexuality.

The Independent translated Kirill's comments, noting that they were made earlier in January and posted on the Church's official website.

In the interview, Kirill says: "[ISIS] is creating a civilization that is new by comparison to the established one that is godless, secular and even radical in its secularism," he said.

"We can have parades for the sexual minorities — that is supported — but a million French Christian protestors defending family values are broken up by police," he added, referring to LGBT-issue marches in Europe.

Kirill further asserted that the "godless civilization is reaching maturity," and said that enforced liberalism is prompting some young people to join extremist factions.

"If you call non-traditional relationships a sin, as the Bible teaches and you are a priest or pastor, then you risk not only your ability to serve but you may be sent to prison," he continued.

"I could offer more simply frightening examples of how the godless civilization is growing yet here they are drawing attention to young people being converted by extremists," the Russian Orthodox leader said.

"Look how they [the West] build the world — an unholy world — but we invite you to build God's world. ... And they [ISIS supporters] respond to that; it is for this they give their lives," he added.

The government of President Vladimir Putin, who Kirill is a strong supporter of, has sought to clamp down on what it sees as dangerous LGBT activism in the country.

The Washington Post reported last week that lawmakers are considering enacting a ban on all public displays of affection among gay people, which could lead to a fine or a two-week jail sentence for things such as couples kissing or holding hands.

Putin and other senior officials have blamed "nontraditional sexual relations" for a corrupting influence on Russian morals. Previous bans include a controversial 2013 law that sought to shut down LGBT propaganda in the form of public speeches to children that compares gay lifestyles to straight ones.

The Post noted that the Russian government regularly proposes controversial draft laws that do not end up becoming law, and it remains to be seen whether the latest effort will be successful. Oregon Moves to Seize Property From Couple Who Refused to Bake Cake for Lesbian "Wedding"
The State agency that ordered an Oregon Christian couple to pay two lesbians $135,000 for refusing to take part in their homosexual “wedding” has begun legal proceedings to seize the couple’s assets.
Comments
×