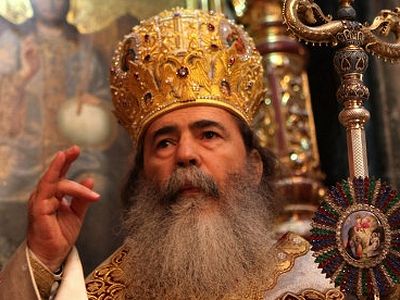 On the afternoon of Friday, the 9th/22nd of January 2016, deliberations began at the Synaxis of the Primates of Orthodox Churches at the Stavropegic Church of St Paul in Chambesy. Deliberations began with a prayer, the introductory speech of the Chairman of the Synaxis, His Holiness the Ecumenical Patriarch Bartholomew, and speeches of the Primates in the order specified in the Diptychs.

His Beatitude Theophilos, Patriarch of Jerusalem, addressed participants in Greek. Here follows an excerpt from His speech:

“The purpose of our synaxis is truly holy and sacred, the completion of the work that was commenced a long time ago by our fathers, namely the study, review and resolution of vital issues and problems facing our flocks and our fellow human beings across the globe.

Therefore, our synaxis provides testament to our unity in Christ through the bond of peace (Ephesians 4:3) and consolation to Christians mercilessly persecuted today in the Middle East and other parts of the world, as well as moral strengthening for contemporary man, tested and tortured by political disunity and divisions, by the economic and moral crisis and by arbitrary and unprecedented hideous crimes against innocent souls.

Our synaxis is similarly a manifestation not only of coexistence but also of our affinity and correspondence as members of the same Body of Christ, the Church, bearing testament to the truth that each member belongs to all the others according to the Apostle to the Gentiles (Romans 12:5); and not only that, but also that we suffer for one another as when one part suffers, every part suffers with it (1 Corinthians 12:26).

Therefore, placing our trust in the education, construction and salvation of the souls of our rational flocks, we have by the Lord Himself the authority, in the upcoming great Pan-Orthodox Synaxis, arranged by the synaxis of the primates in Constantinople in March 2014, to rule on the issues that have been unanimously agreed upon and on those on which unanimity has not been reached, and assign these for further thorough study and resolution.

Thus, by order of the Lord to tend my sheep, and the request of the Apostle to the Nations, no one should seek their own good, but the good of others (1 Corinthians 10, 24), let us exceed ourselves, let us put aside obstacles and adversities and let as be moored in the cloudless port of the conference scheduled long ago […]

May the Grace of the Holy Spirit be with each and every one of us”.