An attack on the dean of the Holy Transfiguration Cathedral in the city of Chernigov, Ukraine Archpriest George Shcherbatyuk took place on the evening of January 31. One of the attackers has been identified: it was deputy of the Desniansky district council Yunis Askerov. The archpriest’s injured lip was stitched and he was diagnosed with a concussion at the regional hospital. 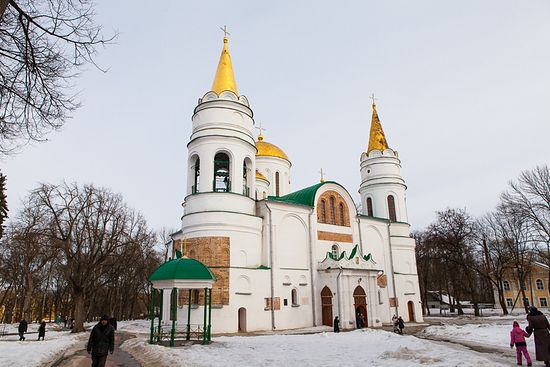 “On January 31 we had an evening service at our church, and I drove to the baptistery at 5 p.m. There two people came up to me, one of whom introduced himself as deputy of the Desniansky district council, and asked why my automobile had been driven onto the territory of the green zone. I asked him to show his documents which was followed by a pause. Then I said to him that I am dean of the Transfiguration Cathedral and he instantly punched me in the face and cut my lip. Another man immediately came up screaming, “A bloody separatist!”, and hit me over the head,” Archpriest George Shcherbatyuk related to the Pravlife.org portal.

Then the assailants started breaking the doors of the dean’s car, knocked down the rear-view mirror of the neighboring automobile, and as they came up to the third vehicle, a man who was passing by threatened to call the police.

“They did not expect that anybody would oppose them. They only cried out, ‘Do you speak Ukrainian?’ and swiftly went away. In all probability they were in a state of alcoholic intoxication, because sober people do not behave this way,” the dean of the Transfiguration Cathedral said.

The police squad on its arrival showed the archpriest a photo array from which he identified one of the assailants: it was indeed deputy of the Desniansky district council of Chernigov Yunis Askerov. His companion, however, has not been identified so far.

An infliction of bodily harm has been reported to the police.

“As for parking the automobile near the church, a road sign there allows us to do it. The community had arguments with the nature reserve on this matter but they have stopped because we have a right to drive onto our territory. This is the land of our community there, we labor and serve there, and there is a need to bring building materials, flour for baking communion bread, take small children for baptisms, as well as sickly parishioners who are unable to get to the church on their own,” Archpriest George Shcherbatyuk explained.

In his view, the reason for the assault has nothing to do with any offences.

“I believe it was a politically motivated assault,” he said in conclusion.