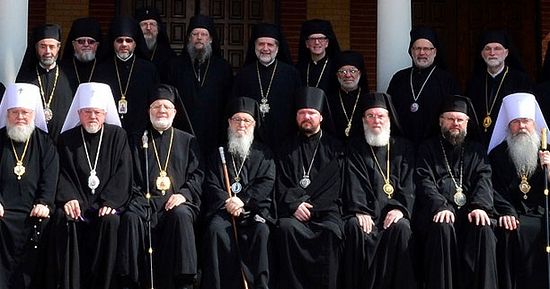 In his report delivered at the Bishops’ Council of the Russian Orthodox Church, His Holiness Patriarch Kirill of Moscow and All Russia focused, among other things, on the preparation for the Pan-Orthodox Council and the topics which it will consider.

The Orthodox Diaspora is one such topic. As a result of the mass migration in the 20th century, a great many Orthodox Christians found themselves in the territories which are not in the jurisdiction of any Local Orthodox Church. Among those people were hierarchs and clerics of different jurisdictions. Such a situation has arisen that several Orthodox bishops of different Local Churches may reside in the same city.

As His Holiness Patriarch Kirill noted, the Synaxis of the Primates of the Local Orthodox Churches which completed its work in Chambésy a few days ago took a decision on how the issue of the Orthodox Diaspora is to be addressed at the future Pan-Orthodox Council.

In 2009, the Pan-Orthodox Conference approved the establishment of consultative bodies in some regions – the assemblies of all Orthodox bishops who carry out their ministry in a given region. According to the decision taken at the Conference, the assemblies are consultative bodies which by no means restrict the canonical authority of the Orthodox hierarchs of various jurisdictions in diaspora or interfere with their relations with the Supreme Authority of their Local Churches.

It was supposed to be a temporary situation; the Pan-Orthodox Council was to take another, final, decision on the matter. “However, the objective and comprehensive analysis of the problem of the diaspora and, first and foremost, the experience accumulated by the Episcopal Assemblies which, on the one hand, bear witness to the unity of the Orthodox Church, and on the other, confirm the natural right of each Orthodox Church to take care of her flock in diaspora, have shown that no new conciliar decisions on this matter are required, and the current practice of the Episcopal Assemblies is to be maintained,” His Holiness Patriarch Kirill said. Patriarch Kirill: Any unilateral actions in granting autocephaly should be excluded
"Our Church, among a number of other Local Churches, has repeatedly insisted that the elaboration of this topic should be completed and the draft document should be submitted to the Pan-Orthodox Council." Ecclesial Conservatism in Contemporary Society
Over the past few months, an outbreak of events involving the Russian Orthodox Church has occupied public attention. A series of sensational stories centered on the clergy has evoked a flood of tense conversations in the media regarding the place and role of the Russian Orthodox Church in contemporary society. The situation is continuously becoming more heated, and has already spilled over into open opposition between ecclesiastical and anti-clerical forces.
Comments
×