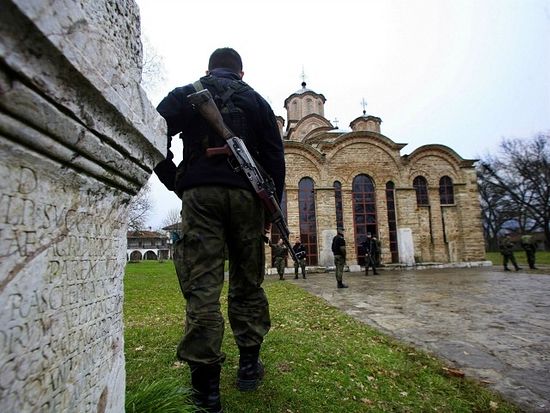 Dragisa Murganic, secretary of the Red Cross in Kosovo, told BIRN that they backed an appeal for Serbs in Kosovo to donate part of their income to the Serbian Orthodox Church's Diocese of Raska and Prizren.

“It is a good proposal. Everything that’s in the interest of the people of Kosovo is welcome. We need to express a lot more solidarity in these difficult times,” Murganic said.

He spoke after Marko Djuric, chief of the Serbian government's Office for Kosovo, called on all those benefiting from the Serbian budget in Kosovo to set aside part of their incomes to support the diocesan fund.

"All the funds will be under the watchful, attentive and proper management of the Church, and will aim to strengthen the functioning of our people in municipalities and communities where there are vulnerable,” Djuric said ahead of a meeting with the head of the diocese, Bishop Teodosije, adding that funding will not be mandatory.

The Holy Synod of the Serbian Orthodox Church set up the diocesan fund a year ago. One of its projects was to finance six soup kitchens run by a Kosovo Serb NGO, the "Mother of the Nine Jugovics”.

The Diocese has already signed contracts with most Serbian politicians in Kosovo who have agreed to set aside part of their income for the fund.

Dusan Janjic, from the Forum for Ethnic Relations, warned that this type of solution will not work in the long term, however, as the Serbian state needs to find more systematic solutions to the funding issues facing Kosovo Serbs.

“I understand the need for this type of suggestion but I think it rests on bad foundations. Serbia needs to find a systematic solution,” he said.

Rade Trifunovic, coordinator of the Association of the Families of the Kidnapped and Murdered in Kosovo and Metohija, from the divided northern town of Mitrovica, told BIRN that while he supports the project it cannot be mandatory. This is because a large number of Kosovo Serbs live in poor conditions and cannot afford to donate cash.

“The project is good, I support it, but it needs to be the personal matter of every individual. Many people are living on welfare and on minimum wages… a lot are unemployed… the question is whether they can afford to give anything,” Trifunovic said.

After their meeting on Wednesday, Djuric and Bishop Teodosije stressed that Kosovo Serbs need to stay in their homes and they again called on Serbs who had left Kosovo to return.

Following the end of the Kosovo conflict in 1999, many Serbs were expelled or fled and their homes were burned or destroyed. Of 150,000 or so Serbs who left Kosovo after the war, most remain in Serbia.

The number of non-Albanian voluntary returnees to Kosovo since 2000 stands at 26,323, according to UN data, and the pace of returns remains slow.

A total of 123 Kosovo Serbs returned between July and September 2015, the UN secretary-general’s latest report on the situation in Kosovo said this month. Inclusion of Kosovo in UNESCO will have irreversible consequences - Metropolitan Hilarion

Inclusion of Kosovo in UNESCO will have irreversible consequences - Metropolitan Hilarion
The metropolitan said the global community has witnessed encroachments on the holy places of this territory "perpetrated by radical activists with the connivance of the local authorities."

Mother Theodora’s “Kokoshki,” or God is stronger than rockets
An Interview with Nun Theodora of the Serbian monastery of Gra?anica
Peter Davydov
There was a miracle there: At the time we were under fire old Grandfather Pero was in the house. The old caretaker of the vineyard lingered—he didn’t try to flee anywhere. A Tomahawk missile made a direct hit: the whole house was turned into ruins in a second. When the dust settled, there was old Pero standing there looking around. Later our soldiers asked him, “Grampy Pero, how are you still alive?!”
Comments
×