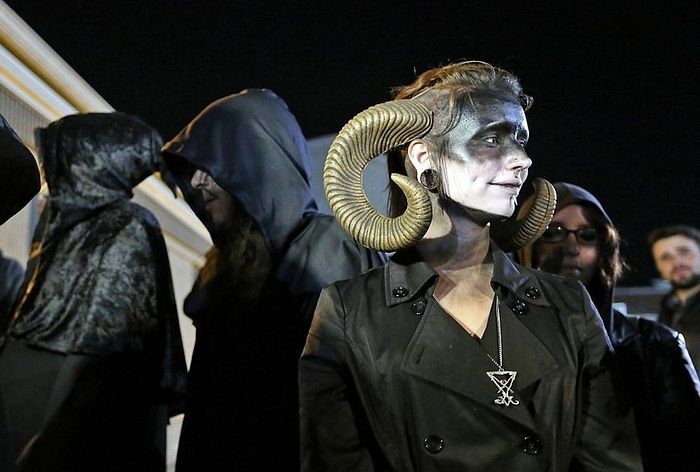 In this 2015 file photo, a Satanic Temple of Seattle member wears horns outside a football game in Bremerton, Wash. (Meegan M. Reid/Kitsap Sun file via AP)


For weeks now, Phoenix lawmakers have wrestled with the idea of allowing members of a Satanic group to give the invocation before an upcoming city meeting.

From now on, lawmakers decided in a 5-4 vote, council meetings will no longer begin with a traditional prayer, but instead open with a moment of silence.

Although the decision may block the Satanic Temple’s Feb. 17 invocation, it prompted outcries from some Phoenix residents and city officials who believe the prayer ban is a de facto victory for the Satanists.

“This is what that Satanist group wants,” Councilman Sal DiCiccio told the Arizona Republic. “A moment of silence is basically a banning of prayer. It’s to agree to the Satanic goal to ban prayer.”

In a tweet, DiCiccio called it a “sad day for Phoenix.”

Phoenix Mayor Greg Stanton and four members of the council voted in favor of the change and argued that an effort to silence particular groups could land the city in an expensive legal battle.

“The First Amendment to the Constitution is not ambiguous on this issue,” Stanton said, according to the Republic. “Discriminating against faiths would violate the oath that all of us on this dais took. I personally take that very, very seriously.”

Gregory Lipper, a senior attorney at Americans United for Separation of Church and State, said the mayor’s prediction is sound. 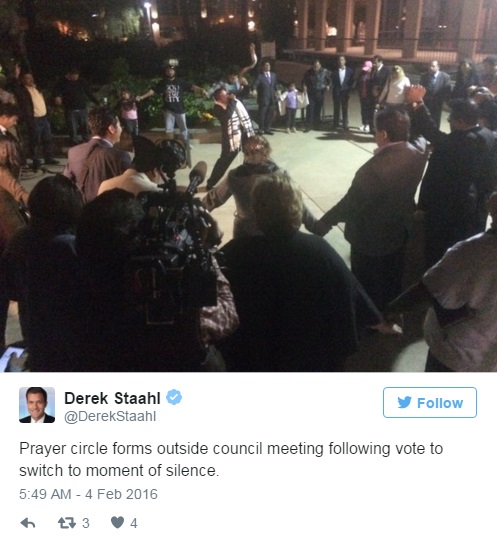 Lipper, who has represented the Satanic Temple in previous legal battles, said that two years ago, the Supreme Court held in Town of Greece v. Galloway that a community’s practice of beginning legislative sessions with prayers does not violate the First Amendment’s Establishment Clause.
However, Lipper said, while local governments can open meetings with prayers, those governments cannot control the content of those prayers unless they denigrate other faiths or include proselytizing. Much of the resistance to the Satanic Temple, he said, comes from people who believe the group is made up of devil worshipers, and they tend to unleash fierce opposition that wouldn’t hold up in a court of law.

“This is an issue that will come up in homogeneous communities when a member of a minority religion takes advantage of the invocation and it tends to generate a backlash,” Lipper told The Post. “Most local governments are used to a steady drumbeat of Christian clergy delivering Christian prayers. We’ve seen this same issue with Muslim prayer-givers and Wiccan prayer-givers around the country.

“When they show up, all the sudden the practice generated a bunch of objections.”

Lipper said the Phoenix City Council made the right decision, but for “disturbing reasons.”

“They’re saying, ‘we don’t like their prayers, so we’re going to shut the whole thing down,'” he said. “It leaves a bad taste in the Satanist’s mouth.”

Contrary to the name, Satanic Temple members are non-theists who do not believe in the existence of the devil and promote the idea that religion can be divorced from superstition. On its Web site, the Satanic Temple describes its mission as encouraging “benevolence and empathy among all people.” Among the group’s seven tenets: “The freedoms of others should be respected, including the freedom to offend.”

“Our tenants are rational and we emphasize compassion,” Satanic Temple founder Lucien Greaves told The Washington Post. “Satan to us is metaphorical and represents a universal fight against tyranny and autocracy.”

The group has set off numerous headline-making free-speech debates in recent years by using provocative imagery. In 2014, it unveiled a proposal to place a seven-foot Satanic statue in front of the Oklahoma state capitol, next to a statue of the Ten Commandments.

Later that year, after threatening a lawsuit, the Satanic Temple — in conjunction with Americans United — convinced Florida officials to allow the temple to move forward with a holiday display in the state capitol in Tallahassee that showed an angel dropping from the sky into a pit of flames. The week-long display, which Florida officials had previously labeled “grossly offensive,” was placed in an area designated as an open forum for private speech.

Greaves said Thursday that the dispute with the Phoenix City Council began in December, when a local member of the Satanic organization applied via email to give the invocation before the governing body. Temple members, he said, assumed they’d walk in, give the invocation and leave, with their entire effort going mostly unnoticed.

That changed, the Republic reported, when news of the invocation spread and council members were “inundated” with comments from constituents.

“We’re an assertion of plurality,” Greaves told The Post. “The only way these type of open forums work is if multiple voices get involved. You need to allow for expression you might not agree with or want and we’re a hard and fast test of those principles.”

A proposal from four councilmen to let lawmakers take turns inviting different religious groups to give the prayer — indirectly blocking the satanists — was scrapped last week after city attorney Brad Holm noted it would constitute a First Amendment violation, according to the Republic. 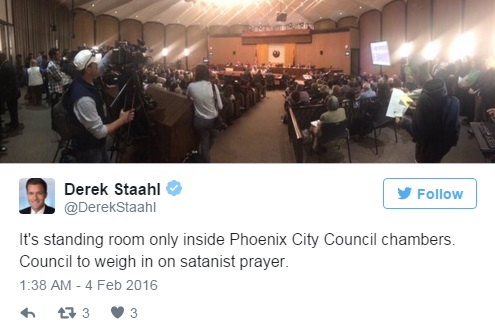 The contentious issue came to a head Wednesday when more than a hundred people gathered in the council chambers to offer testimony on the issue that lasted for more than two hours, according to the Republic.

“I am not for the silent prayer,” Pastor Darlene Vasquez told council members, according to the Republic, which reported that Vasquez broke down in tears. “I want those who believe in the one true God to pray. It breaks my heart to hear what is going on.”

No Satanic Temple members addressed the council at the meeting, but Greaves — who watched a livestream of the gathering on the other side of the country —said he was shocked by what he saw. He noted that speakers referred to the Satanic Temple as a “cult” and a “hate group” and said council members accused the group of trying only to ban prayer entirely.

“It was kind of horrifying,” he told The Post. “I noted that it seemed outright medieval in there and really took on the atmosphere of an old school tent revival. There were people weeping and calling out the name of the one true god. It was really strange, a really strange thing to see.”

After the lawmakers voted to replace prayer with a moment of silence, DiCiccio, the council member, called the ruling a “big win” for the Satanic Temple, according to the Republic. He added that the city’s religious community plans to collect signatures to force another vote and overturn the council’s decision.

Unsure about whether the new council ruling retroactively eliminates the invocation schedule, Greaves said there remains a chance his group will still wind up giving the invocation later this month. The Satanic Temple, he said, never intended to have a moment of silence implemented by the city council — but he considers it a welcome improvement.

“The moment of silence is the most tenable option of any in the public chambers,” he said. “Anything else is a bit difficult to manage and really not the business of a government body anyway. Ultimately, it turns out for the good, but to whether people allow this debate to educate them about Constitutional rights is an open question.

“But the lesson is there,” he added. Christians Plead With Okla. City Mayor to Stop Satanists Pouring Blood Over Virgin Mary
The Catholic groups insist that the planed event amounts to religious persecution that has received City Hall's "stamp of approval," and have called it an attack on every Catholic in America. Satanists from different groups around the country are holding various events this Christmastime, claiming that they are seeking to participate alongside other religions in the holidays, and arguing for the separation of church and state. First 'Greater Church of Lucifer' to Open Doors in Texas

First 'Greater Church of Lucifer' to Open Doors in Texas
"The Greater Church of Lucifer is a foundation for the unique individual who dares to illuminate the inner-light of the Black Flame," according to their website. "As individuals, we seek to express our insight towards attaining apotheosis, Lords of our spiritual and carnal world. As a foundation, GCOL seeks to inspire the few in the masses towards self-excellence and change." Why Religion Is Always Public
Joel J. Miller
For all of its private aspects, religion is a public affair. Whether a person considers himself a cultural warrior or just a humble and faithful adherent, there are always social implications to belief.
Comments

ChiRho3/2/2016 7:34 am
This is where "tolerance" leads. Christ did not respect false religions, He did not say all religions are equal.
The only ones who want to "coexist" are soft, hippy, effeminate Christians. The other religions seek superiority, and the abolition of Christianity. History proves it, and current events prove that history repeats itself.

I would love for pagans to find the Truth, but the Scriptures tell us that it is not so, not before Christ's return. We should try and influence others on an individual level, but political policies for nations should not be so naive as trendy bumper stickers.
×