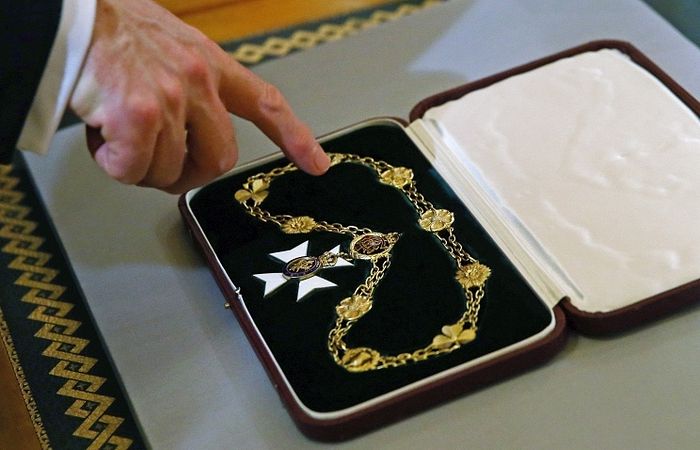 The Royal Victorian Chain awarded by a British monarch to Russia’s last Emperor, Nicholas II, has been presented on long-term lease to Moscow Kremlin Museums from the art collection of the British Royal Family — a gesture of friendship, Russia’s Deputy Culture Minister told a handover ceremony on Thursday.

"We are witnessing an historic moment — acquisition of a priceless relic, a symbol of friendship and cooperation between Russia and Great Britain," Vladimir Aristarkhov said. "This is especially symbolic coming on the eve of 100 years since the events of 1917 resulted in the tragic death of Emperor Nicholas II," he said.

The Order was instituted by Britain's King Edward VII in 1902 to award foreign monarchs, members of royal families and occasionally high-ranking individuals.

Moscow Kremlin Museums Director Yelena Gagarina said the chain was presented to Russia at the request of Queen Elizabeth II for unlimited lease not calling for a reciprocal gesture. If requested, however, the Russian side would return it for exhibitions or other events.

Until recently, the chain had been in the private collection of Russian Academician Andrei Khazin, having been sold in 1922 after relics from the Moscow Armory Chamber were conveyed to Gokhran, administrators of the state fund of precious metals and precious stones.

The chain saw new light of day during preparations for the 2015 "European Orders of Knighthood" exhibition in the Moscow Kremlin and became British Crown property again under rules governing the Order on the death of the person holding the decoration.

Visitors can view the chain among exhibits of the Armory Chamber. Saint Edmund the Martyr, King of East Anglia and Patron-Saint of England

Saint Edmund the Martyr, King of East Anglia and Patron-Saint of England
Commemorated November 20/December 3
Dmitry Lapa
St. Edmund, whose name means “blessed protection”, was probably born in 841. He lived during one of the most troubled periods of early English history, when hordes of Danish pirates were devastating English kingdoms one after another, burning churches and monasteries, ravaging them, murdering Christians and all inhabitants.

Miracles of the Royal Martyrs
Archpriest Alexander Shargunov
From that time on we often appealed to the holy Tsar Nicholas, and help came immediately under extraordinary circumstances. Since Tsar Nicholas Aleksandrovich was not only our Sovereign, but also head of a large family, we began to pray to him whenever we had family conflicts and disagreements. Peace was restored to our family very quickly. O holy Royal martyrs, pray to God for us!
Comments