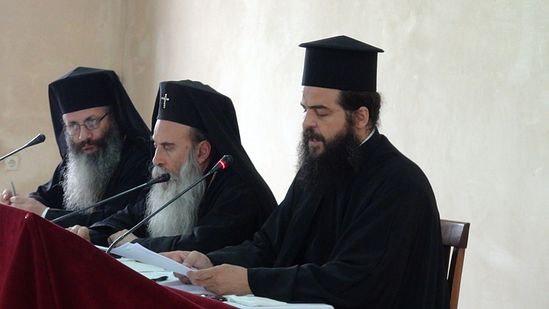 The Greek information agency Romfea has published a detailed commentary on the draft document of the Pan-Orthodox Council “Relations of the Orthodox Church with the rest of the Christian world,” which was composed by a cleric of the church of St. Nicholas in Patras, the theologian and priest Anastasios Gkotsopulous.

It is an extensive commentary, in which the author attempts to give an objective evaluation of the documents adopted at the Fifth Pan-Orthodox Pre-Conciliar Session and placed on the agenda of the Holy and Great Council planned for June 2016.

The introduction points out that “Every Council of the Orthodox Church convened until today, beginning with the Apostolic and ending with the Ecumenical and Local councils, above all, were concerned with the proclamation of the Truth of Christ and, at the same time, with the condemnation of heresies and schisms in the Body of Christ. Conciliar texts are always distinguished by scrupulous precision in their details of the Church’s experience in the Holy Spirit …”

With regards to the draft document of the Fifth Pan-Orthodox Pre-Conciliar Session entitled “Relations of the Orthodox Church with the rest of the Christian world,” it is impossible to apply these specified characteristics.

In the opinion of Fr. Anastasios, the main provisions of the text adopted in 2015 are fundamentally the same as the provisions and proposals of the Third Pan-Orthodox Pre-Conciliar Session.

There is, however, one important difference, in that the draft document “Relations of the Orthodox Church with the rest of the Christian world” contains no analytical or critical evaluation of any of the bilateral theological dialogues with the Christian communities mentioned in the text of the Third Pan-Orthodox Pre-Conciliar Session. After all, these dialogues, both official and unofficial, were held between 35 and 50 or more years apart.

“Perhaps the Council is no longer interested in the results of the dialogues, as they are progressing successfully? Or maybe some are afraid that if the Holy and Great Council embarks upon discussions of the progress of the bilateral theological dialogues then what every primate of the Local Orthodox Churches well knows, but isn’t brave enough to openly declare, will become obvious: that all the dialogues are at an impasse?” asks the author of the commentary.

“The majority of the dialogues have actually failed, but our ecclesial leaders haven’t informed us. Why? Because, undoubtedly, to openly and publicly confess the failure of the dialogues would leave the ecumenical movement out to dry!”

Then from a general consideration of the document the author proceeds to a more detailed look.

From his side, the first four articles of the text deserve positive comments, and especially the first, where is unambiguously proclaimed the dogma that the Orthodox Church is the “One, Holy, Catholic, and Apostolic Church.”

But then there are presented many ambiguities, equivocal formulations, and theological contradictions, writes Fr. Anastasios, fully concurring in his main points with all those who have already fully spoken against this draft document—Metropolitan Athanasios of Limassol, Metropolitan Symeon of New Smyrna, Bulgarian clergy including Schema-Hieromonk Dimitry of Zographou, Metropolitan Seraphim of Piraeus, and Metropolitan Hierotheos of Nafpatkos.

In the sixth article heretical groups are called “Christian churches,” thus giving rise to the wholly reasonable question: is there one, or many Churches? Moreover, nowhere in the text is the word “heresy” mentioned, giving the impression that “there is no longer heresy, there is only … the Church!”

Like Metropolitan Seraphim of Piraeus, the author wonders: why invite observers of other faiths to the Council?

“Now, as in the ‘new historical conditions’ (article 4) there no longer exists heresies, we can therefore invite as ‘observers’ to our Council ‘delegates from Christian churches and confessions with whom the Orthodox Church conducts theological dialogues.’”[1]

“In Church history heretics were invited and attended Councils not as honorary ‘observers,’ but in order to bring them to repentance, and if they persisted in error and heresy, then they were given over to anathema, expelled from the Council and did not participate in the rest of its activities.”

Commenting on the intention to invite “observers” to the Council, Fr. Anastasios fears that “the presence of heretics as ‘observers’ will have the most serious catastrophic consequences:

1. It will cause misunderstandings among the faithful;

2. Instead of contributing to the unity of our Church it will shake it, giving serious cause for the creation and strengthening of schisms!”

The author then moves on to article 20, in which he also notes ambiguous and vague statements that are not “consistent with the importance and conciliar authority of a Pan-Orthodox decision. It is necessary to define with the utmost accuracy what is implied by the terms ‘prospects’ and ‘canonical criteria.’ Such an imprecise statement is prone to numerous readings and misinterpretations, which only creates problems.”

Fr. Anastasios also notes that article 20 logically follows article 19 which speaks of the World Council of Churches. Consequently, when “Christian churches and confessions” are mentioned, it refers to the more than 345 member communities of the World Council of Churches, not limited to the six with which the Orthodox Church has theological dialogues. The Greek priest recalls that these communities have very diverse theological views.

Drawing his comments to a close, he notes that the text “Relations of the Orthodox Church with the rest of the Christian world” is especially important as it addresses the Holy and Great Council, and through it the entire Orthodox Catholic Church.

This document is a text is of dogmatic nature, and, correspondingly, should be related to as a dogmatic resolution of a Pan-Orthodox Council.

Considering the text through this prism, it becomes obvious that it does not rise to its high calling. The impermissible ambiguities, numerous contradictions, and divergences from today’s Church Tradition will undoubtedly create serious problems in Church theology, which will harm the Body of Christ to the delight of her enemies.

“We hope and implore the Holy Spirit to rest upon the Holy and Great Council, and rightly divide the word of Christ’s Truth … to the glory of God and His people, and to disgracing of the enemies of Truth.”

[1] According to the decision of the Meeting of the Primates of the Local Churches, the invited “observers” will be the representatives of the Roman Catholic Church, Armenian, Anglican, and different confessions.