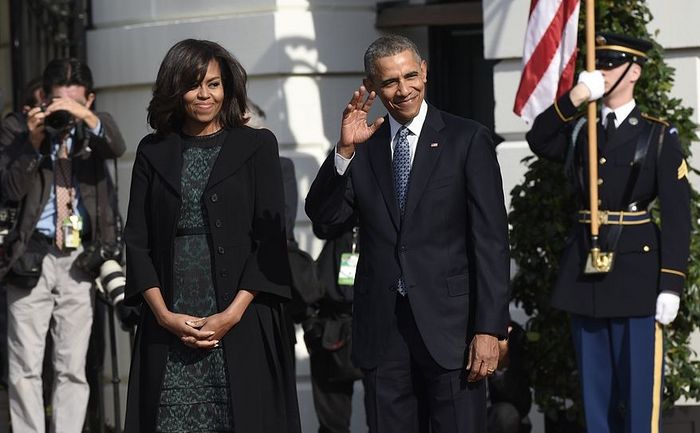 President Barack Obama waves as he waits with first lady Michelle Obama for the arrival of Canadian Prime Minister Justin Trudeau for a state arrival ceremony on the South Lawn of White House in Washington, Thursday, March 10, 2016.

“Genocide” is a word, like “Hitler,” that is used carelessly in the heat of a campaign as a synonym for prejudice, partisanship and persecution of minorities. But despite all the evidence at hand, President Obama stubbornly refuses to call the persecution and systematic annihilation of Christians in the Middle East by its right name, genocide.

The United Nations defined genocide in 1948, in the wake of the Holocaust, as “acts committed with intent to destroy, in whole or in part, a national, ethnic, racial or religious group,” including by the means of “killing members of the group.”

The stubborn refusal of the Obama White House and his State Department to apply the word to the work of radical Islam is an enduring mystery. Hundreds of thousands of Christians, Yazidis and other religious minorities have been driven from their ancestral homes in Iraq and Syria or have been slaughtered by the Islamic State, sometimes called ISIS.

Iraq’s Christian population was about 1.5 million only a decade ago, and is estimated now to be only a third of that. Half of the 1.1 million Christians in Syria have died or have fled. Christians have been tortured, raped and even crucified in the name of radical Islam. Mosul, the Iraqi city that was home of 35,000 followers of Christ is empty of Christians now after ISIS gave them an ultimatum to flee or convert to Islam or face a gruesome execution. Gregorios III Laham, the Melkite Greek Catholic patriarch of the Church of Antioch, reported that “entire villages have been “cleared of their Christian inhabitants.”

American human rights activists — both Jews and Christians — have asked the Obama administration to admit Christian refugees to the United States under special quotas. American policy now discriminates against Christians of the Middle East. The U.S. State Department accepts refugees from lists prepared by the Office of the United Nations High Commissioner on Refugees, which oversees large refugee camps in the Middle East. Endangered Christians dare not enter the camps with their families because they are routinely attacked by Muslim refugees.

Christians, human rights and religious freedom advocates have been calling on the Obama administration for months to label what is happening as “genocide,” arguing that the terminology would encourage others to respond to the crisis. Secretary of State John Kerry in particular has difficulty seeing what everybody else sees. He told Congress last week that he needs an “additional evaluation” to help him determine whether the systematic murder of Christians and other religious minorities should be declared “genocide.”

White House Press Secretary Josh Earnest says the hesitation to apply the label is about “legal ramifications.” Rep. Jeff Fortenberry of Nebraska, a Republican, has introduced a resolution in Congress to declare that the slaughter of Christians is in fact genocide.

The administration, which stubbornly refuses to use the words “radical Islam” or call Islamic terror by that name, works to appease Islamic regimes in the Middle East, many of whom have long placed restrictions on Christian religious practice and look the other way when Christians are abused.

Christian groups in the United States have begun applying heat to the White House to do something about it. A petition decrying such abuse, co-sponsored by the Knights of Columbus and an organization called In Defense of Christians, has been introduced in a television commercial broadcast nationally. The commercial includes statements by Hillary Clinton, Ted Cruz and Marco Rubio endorsing a genocide declaration, which is supported by 55 percent of Americans, according to a Marist Poll. The signers of the petition “implore” Secretary Kerry “to speak up on behalf of these brutalized minority populations and to declare that Christians, along with Yazidis and other vulnerable minorities, are targets of ongoing genocide.” Fifty Countries Named to Christian Hall of Shame; 2015 Was Worst Yr. Ever for Christian Persecution
With North Korea leading the way and Islamic extremism rapidly expanding, 2015 was the "worst year in modern history for Christian persecution," the Religion News website reports today.

Federal Discrimination Against Religion?
Religious groups will not receive an exemption from an executive order signed this morning by President Barack Obama banning “discrimination” based on sexual orientation or “gender identity” by federal contractors.
Comments

Ronald A. G. SARKIS8/22/2016 10:08 pm
Mr. U.S. President i possibly misinformed. However his refusal to name what has been and is happening against Christians, namely Orthodox "genocide" will not change history by any way whatsover.
×