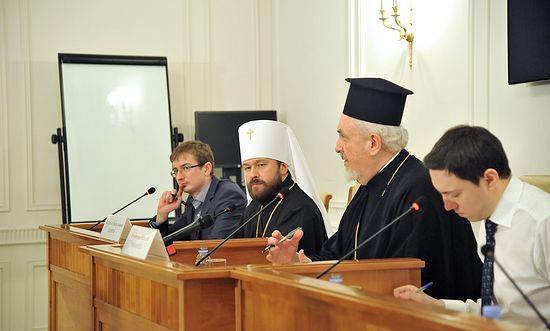 On March 11, 2016, with the blessing of His Holiness Patriarch Kirill of Moscow and All Russia, Ss Cyril and Methodius Theological Institute of Postgraduate Studies hosted a seminar on the Pan-Orthodox Council due to take place on the island of Crete in June this year.

Metropolitan Emmanuel of France (Patriarchate of Constantinople), President of the Assembly of Orthodox Bishops of France, and Metropolitan Hilarion of Volokolamsk, chairman of the Moscow Patriarchate’s Department for External Church Relations, chairman of the Synodal Biblical and Theological Commission, rector of the Institute of Postgraduate Studies, were keynote speakers at the meeting.

Among those who took part in the seminar were Metropolitan Arseniy of Istra, Patriarchal first vicar for Moscow; Archbishop Yevgeny of Vereya, chairman of the Education Committee of the Russian Orthodox Church; Bishop Feofilakt of Dmitrov, abbot of the Monastery of St Andrew in Moscow; Bishop Sergiy of Solnechnogorsk, head of the Administrative Secretariat of the Moscow Patriarchate; Bishop Panteleimon of Orekhovo-Zuyevo, chairman of the Synodal Department for Church Charity and Social Ministry; Bishop Savva of Voskresensk, abbot of the Novospassky Monastery in Moscow; Archimandrite Seraphim (Shemyatovsky), representative of the Orthodox Church of the Czech Lands and Slovakia at the Patriarch of Moscow and All Russia; Archimandrite Alexander (Pihach), representative of the Orthodox Church in America at the Patriarch of Moscow and All Russia; archpriest Nikolai Balashov, DECR vice-chairman; archpriest Sergiy Privalov, acting chairman of the Synodal Department for Relations with the Armed Forces and Law-Enforcement Agencies; archpriest Vladimir Vorobyev, rector of St Tikhon’s Orthodox University; and Mr. Andrey Shishkov, secretary of the Synodal Biblical and Theological Commission.

Greeting all those present, Metropolitan Hilarion of Volokolamsk said in particular, “The decision to convene the Council was taken at the Synaxis of the Primates of the Local Orthodox Churches. His Holiness Patriarch Kirill of Moscow and All Russia was among its participants. That was when we asked Patriarch Bartholomew of Constantinople to send to the Russian Church an authoritative hierarch who could present the Ecumenical Patriarchate’s point of view on the preparation and proceedings of the Pan-Orthodox Council.”

Then the floor was given to Metropolitan Emmanuel of France who spoke on the agenda of the forthcoming Council and its inter-Orthodox and public context.

Metropolitan Emmanuel emphasized that the Council would show the unity of Orthodoxy to the world and noted that one of the most important items on its agenda would be the situation in the Middle East and the plight of Christian communities in the region, now facing elimination. According to the speaker, it is a humanitarian tragedy, a tragedy of the historical and civilization scale.

The situation in the Middle East was the central item on the agenda of the meeting between Patriarch Kirill of Moscow and All Russia and Pope Francis, Metropolitan Emmanuel of France reminded all those present, noting its significance.

While speaking about the social and demographic context in which the Orthodox Church lives and acts nowadays, the speaker mentioned that the number of people professing Orthodox faith had increased dramatically for the past century. Thus, according to the survey carried out by the Collège des Bernardins, the number of Orthodox Christians in the world increased from 124,923,000 in the early 20th century to 274,447,000 in 2010.

Metropolitan Emmanuel also spoke on the published documents prepared for the Council and thus providing an opportunity to the faithful to get an overview of the preparation process. As the speaker noted, a careful study of the documents to be submitted to the Council for consideration will show great relevance of their topics.

An address by Metropolitan Hilarion followed. The DECR chairman said in particular, “The preparation of the Council lasted 55 years. It is a very long period. One may ask why it took so long to prepare the Council. We can present many reasons for that, both intra-church and geopolitical. However, the fact that the date of the Council is approaching makes us think that the Divine Providence guided our Church in such a way that the Pan-Orthodox Council was not convened earlier, but is to be held now. Not long ago the meeting between the Patriarch of Moscow and All Russia and Pope of Rome took place in Havana. The preparation for that meeting had lasted 20 years: the year 1996 saw the beginning of preparation of a meeting between Patriarch Alexy II of the blessed memory and Pope John Paul II. The meeting was scheduled for the year 1997; its venue and date were fixed; yet, the meeting did not take place. Later frequent attempts were made to resume the preparation process, but at last the meeting between the Primates was held at a time when it was to be held. We see the Divine Providence showing us the right time and venue for such historic meetings.”

As Metropolitan Hilarion noted, the Pan-Orthodox Council will be the first assembly of representatives of all recognized Local Orthodox Churches since the VII Ecumenical Council. “It not only lays special responsibility on us, but also raises certain questions among that part of our flock which asks what kind of Council it will be, why it is necessary to hold it, if it will be the VIII Ecumenical Council convened to reconsider the decisions of the ancient Ecumenical Councils, or if this Council will introduce some novelties which will weaken our Holy Orthodox Church in her commitment to the truth. Such voices are being heard, and in order to make the agenda and the topics of the Council known to our faithful, we insisted from the very beginning that this process must be transparent.”

The DECR chairman reminded all those present that the Moscow Patriarchate had always insisted that all the decisions of the Council must be taken by consensus of the Local Churches. “We have adopted such working procedures of the Council that give one voice to each Local Orthodox Church,” Metropolitan Hilarion continued, “Consensus means like-mindedness of all the Local Orthodox Churches. It does not imply that there can be no differences of opinion among members of a certan delegation. Yet, it implies that the delegation itself will seek the solution to such problem; it must not become the Council’s problem. In the event that a certain hierarch will not agree with a document or a statement contained in it, he will be able to express his opinion within his delegation. However, it is the delegation that decides whether to endorse or not certain statements in the document. Consensus among delegations is the basic principle of the Pan-Orthodox Council’s work.”

For this reason, the agenda of the Pan-Orthodox Council, as it is presented today, does not seem impressive or striking, Metropolitan Hilarion noted. “Quite likely, we will not make some epoch-making decisions that will resound throughout the world. Yet, we will make our decisions to conform with the centuries-old teaching of the Holy Orthodox Church and reflect the aspirations of our believers. These will be the decisions disputed by no one.”

Apart from the Working Procedures of the Council, six more documents have been prepared to be submitted for discussion at the Pan-Orthodox Council. These are “The Sacrament of Marriage and Its Impediments,” “The Importance of Fasting and Its Observance Today,” “The Relations of the Orthodox Church with the Rest of the Christian World,” “The Autonomy and the Means of Proclaiming It,” “The Mission of the Orthodox Church in Today’s World,” and “The Orthodox Diaspora.”

According to the DECR chairman, certain difficulties have arisen concerning the two documents. One of them, “The Sacrament of Marriage and Its Impediments,” was discussed this January. The document was signed by all the Churches, except representatives of the Churches of Antioch and Georgia. “As we know,” Metropolitan Hilarion said, “the Georgian Orthodox Church has fundamental objections to the document: a mention of a possibility to enter into marriages with non-Orthodox Christians and of a possibility to bless such marriages according to the principle of Oiconomia provokes sharp criticism in this Church.” The document “The Relations of the Orthodox Church with the Rest of the Christian World” was signed by all the Orthodox Churches at the Pre-Council Conference in 2015. However, after the Conference and the Synaxis had been held, the Holy Synod of the Georgian Orthodox Church, at its session on February 12, 2016, rejected this document, since there are some fundamental amendments and comments to it. Besides, the Working Procedures of the Council were not signed by the delegation of the Orthodox Church of Antioch.

Metropolitan Hilarion asked Metropolitan Emmanuel of France how the Patriarchate of Constantinople will act with regard to the documents that had not been signed by all the Orthodox Churches.

The representative of the Patriarchate of Constantinople noted that it was necessary to focus on the reasons why the documents had not been signed by the Orthodox Church of Antioch and why they were disputed by the Georgian Orthodox Church. As Metropolitan Emmanuel said, it is necessary to pray and seek the solution to the problem existing in the relationships of the Churches of Antioch and Jerusalem. As for the Georgian Church, he emphasized it was necessary to wait for the Georgian Church to make her comments in order to understand why she had rejected the document.

Archpriest Nikolai Balashov thanked the high guest for his fraternal visit. “We attach great importance to the preparation of the Council in these few months left before it begins,” the DECR vice-chairman said, “It is my conviction that this period must be very eventful. We should exert every effort to intensify contacts between the Local Orthodox Churches and communication in various spheres in order to feel out the atmosphere and take into consideration various opinions and differences.”

Letter to the Holy Synod of Greece Concerning Preparations for the Upcoming Great and Holy Council
Met. Hierotheos Vlachos
Metropolitan Hierotheos (Vlachos) of Nafpaktou has written the Archbishop of Athens and the Holy Synod of the Church of Greece concerning the process by which the texts for consideration at the Great and Holy Synod (planned for June of 2016) are to be approved.The Metropolitan brings to light serious violations and disregard for the synodical system of the Church with regard to the acceptance of the pre-synodical texts. He requests that answers be given as to why the hierarchy of the Church never discussed, let alone approved, the documents which will be considered at the Holy and Great Council.
Comments
×