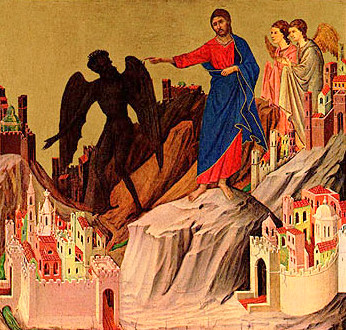 The Reading from the Holy Gospel according to St. Mark 9:16-30

In today’s reading we see a man who has a terrible problem. His boy is demon possessed. That statement alone in today’s thinking is considered quite strange. In the age of science and reason we have come to believe that there is no such thing as demons and some have gone so far as to say there is no such thing as God. Scientists will tell you that demons don’t exist because they cannot test for them. They are not material objects and cannot be observed, because they are spirits. We often forget that there is not simply the world that can be examined, touched, and observed; there is also the spiritual realm that cannot be examined with the eyes, but only with a discerning heart.

Coincidentally I stumbled upon an article that was in the news this week. It spoke of a gathering of Roman Catholic clergy in Italy who are having workshops to train more exorcists because there is a shortage. In my opinion the writer from the Pontifical University, who was being interviewed, hit the nail on the head when he said that Satanism is growing more rapidly than ever because of the internet. It reminds us that everything that enters into us through the senses has an effect on us. This is our theology and it shows in the way we worship. The Church teaches us that the senses must be filled with prayer. We must smell incense, see icons, feel prostrations, hear lovely hymns. The opposite use of our senses is equally powerful but in a negative sense. So let me take this opportunity to remind you to guard your senses and also to remind you that you should never trust your children especially teenagers with computers without filtering software. Never, not under any circumstance, ever. Period.

Back to today’s reading regarding the demon possessed boy. Our primary proof of the existence of demons comes from the Lord Jesus Christ himself. He spoke of them as a reality and even spoke to them directly. Since we trust in the Lord we believe that His words are true regarding matters that might otherwise be seen as superstitious or unenlightened. For us as a Church there is no way around the fact that we are engaged in a spiritual warfare and this warfare includes angels and demons.

The man who comes to the Lord says to him “I asked your disciples to cast them out but they could not.” Our Lord had blessed the disciples to do his work, to heal and to free from the possession of demons but for some reason they could do nothing with this boy. Often in the medical community there will be tried and true remedies to certain illnesses and yet at times we hear that some conditions in some patients are very stubborn. This was the case with this stubborn demon in the boy. The disciples knew how to treat most cases, but not the exceptional one.

It is in the light of this humbling defeat to the disciples that the Lord gives them and the poor man some hope. He is begged to help the boy and He responds with these words of hope “If you can believe, all things are possible to him who believes.” Sometimes the only thing that is holding us back from great things is our limited belief in God. We might be tempted to see God as a sort of very busy CEO who has no time for us and our problems. Why would He ever want to help me? I am not going to ask for anything ... When we think this way we defeat ourselves because Our Lord Jesus wants us to have hope and to believe in Him and to show that in fervent heartfelt prayers.

Next the Lord commands the demons to leave the boy and never to enter again. All are astonished especially the disciples. Remember that they had no luck with helping this boy and yet the Lord was able. The Lord takes this moment to teach His disciples. When He is asked why they could not heal the boy, the Lord tells them that “This kind cannot be driven out by anything but prayer and fasting.” This reading is given to us before the start of the fifth week of Lent as a reminder of why we fast at all. We are coming into no man’s land where every bite of vegetable soup or beans is more painful than the last. Every burger king commercial is more tempting than ever and somewhere in the back of our heads we might be saying to ourselves “why should I deprive myself of so much?” But let the words of the Lord be a source of comfort to you. It is true that most of us are not possessed by demons but we are all influenced by them time and time again every single day.

We fast and pray because these two together create a sword-like faith, a faith that is like a sword fashioned and tempered through fire. After being placed in fire and made red hot almost on the verge of melting and after being pounded by hammers nearly to the point of being disfigured, the sword still does not come out bruised and broken ... it comes out ready for action. In 1 Peter 1:7 we read these words “so that the tested genuineness of your faith–(which is more precious than gold that perishes) though it is tested by fire–may be found to result in praise and glory and honor at the revelation of Jesus Christ.”

The Lord gave this wisdom of prayer and fasting to the disciples and to us because He loves us. We all want to change, we want to become better humans, some of us want to know Jesus Christ more intimately, some of us want to become saints. These are all big results and if you want big results you better have big faith. And if you want to have big faith you better exercise that faith through prayer and fasting.

Now is the time of testing and tribulation but it is brief … and it will soon give way to the unending joy of Pascha. May Our Lord give us strength as we strive to see His resurrection. Glory be to God, Forever, AMEN. Ancient Fears and Modern Man
Fr. Ian Page
I must confess that I met the idea of preaching upon today’s Gospel with a certain degree of trepidation. For several reasons, we modern people find ourselves particularly disconcerted by accounts of demonic possession and exorcism.
Comments