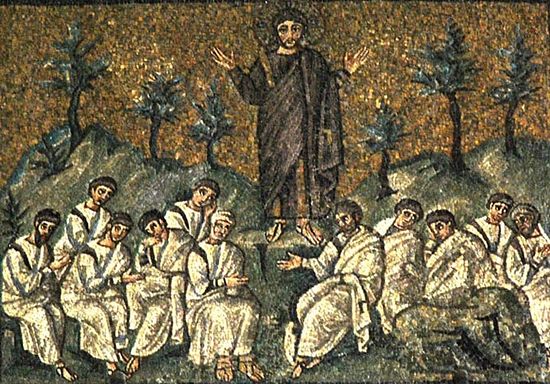 Christ and his disciples

They didn’t listen to Him. They had followed Him daily, for at least three years. They had heard His teachings and seen His wisdom and godly insight and yet, they didn’t believe and they didn’t absorb and assimilate the information that He had just shared with them. He had in fact unwrapped the whole mystery of salvation for them. He had instructed them in the great divine plan. He had opened to them the secret and the meaning of God’s messiah. He had disclosed to them what it meant that He was God’s anointed one. He told them what it was that God the Father had anointed Him to do. He had revealed to them the purpose for which He had taken human flesh and become a man………and they refused to listen to Him.

Our Lord and savior Jesus Christ has given His warning to the disciples. He has now foretold everything that is about to happen to Him. He has laid out the events of Holy Week for us in great detail. But the disciples were not interested. I think it is easy to assume that they were in denial. So they ignored this word of preparation and continued to imagine that the world would exist in the way that they conceived in their minds.

How do we know that they ignored the words of the Lord? The two brother, James and John, come to the Lord and ask a personal request. Did they ask to suffer with the Lord? No. In fact we see the opposite. These two brothers request that they be granted seats of honor and glory next to the Lord since they believe Him to indeed be the messiah.

The Lord is talking about subjecting Himself and His life to the hands of others and these disciples are focused on having subjects to rule with power. The Lord is talking about being betrayed into the hands of sinners and these two are concerned for their standing. The Lord is going to demonstrate His authority and power by becoming the slave and servant of all, while the disciples are thinking about how they might gain simple and worldly authority and power.

In His great gentleness, the Lord takes them aside and teaches the Sons of Thunder what it means to be His disciple.

“You know that those who are supposed to rule over the Gentiles lord it over them, and their great men exercise authority over them. But it shall not be so among you; but whoever would be great among you must be your servant, and whoever would be first among you must be servant of all. For the Son of man also came not to be served but to serve, and to give His life as a ransom for many.”

The Lord tells them that what it means to be a ruler and leader in His kingdom is quite different than what it takes to be a ruler in the world. There were political debates this week and we hear a new story every day regarding the attacks and nasty treatment that the candidates for president accept on a daily basis. Do you know why they accept such treatment? Is it because of “love for the country”? NO! It is out of self-love and out of a desire for unlimited power.

The Lord teaches His beloved disciples that what He will accept at the hands of the corrupt and the sinful men of His time is not done with a desire for unlimited power. The Lord already has such power. What He does is the opposite. Instead of seeking power, He lays it down, along with His life. “Whoever would be first among you, must be servant of all.” That is true for the disciples and they learned it through experience and through the work of the Holy Spirit in their lives. This is true for you as brothers and sisters, especially within the community. Don’t look for ways to lead, lead through devotion and service to one another and to God. This is not a message that is just for you. It is for me as your priest. I was not ordained to be your ruler or your king. I am your servant. I am here for you. God has also placed us here together to support one another and lift one another up in the love of God.

We could all stand to learn from this message of service and we can all learn from the Lord who gives of Himself until there is no more left to give. Some are takers. The disciples who came to Jesus and asked for a special place of privilege were looking to take glory and honor. We are all tempted towards that. Whether lay people or priest or bishops or patriarchs in the Church. The Lord rebukes each and every one of us by giving of Himself until there is only one last thing that He can let can possibly give, only one last thing that He can possibly lay down and that is His very life.

He doesn’t do so begrudgingly and doesn’t complain or grumble. He does all of this with a certain peace and calm. He does what is not easy in order to grant us what was not possible. He opens the door to the kingdom of God when that door had been shut and could be opened by no man. He doesn’t open it by force or by might. He opens the door to our salvation by refusing to exercise His force and His might. He is our King and His force and His might and His power are on full display as He confidently accepts to go to Jerusalem while knowing exactly what suffering and what end would meet Him there. May He who was given up, or rather gave Himself up for the life of the world, grant us to share in this ministry of service and of sacrifice. And May He make us also to share in His glory! AMEN. Weak, Sick, Poor and Tired: A Story for Losers
Fr. Stephen Freeman
It is little wonder that the American Dream is so powerful and popular. The alternative is nothing anyone would choose.And yet, the American Dream may be the greatest obstacle to salvation the world has ever known.
Comments
×