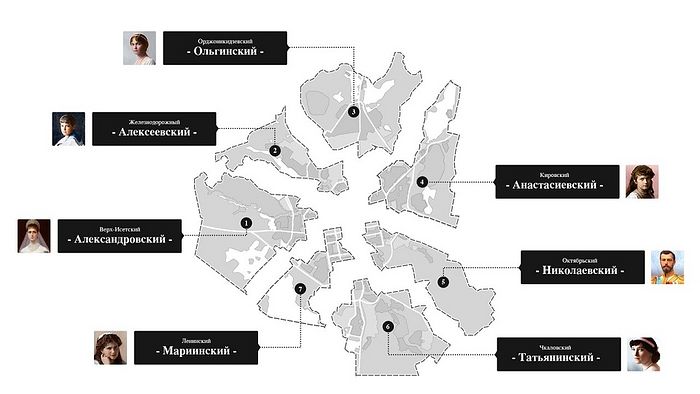 The Ekaterinburg City Senate has sent a proposal to Metropolitan Kirill of Ekaterinburg and Verkhoturye, for the renaming of the city’s districts in honour of the Holy Royal Martyrs, who were all murdered in the Ipatiev House on 17 July, 1918. The Ekaterinburg Senate is an independent civil body was created in 2013 to provide social control for official Ekaterinburg authorities such as City Duma (Council). A copy of the proposal was also sent to Patriarch Kirill of Moscow and All Rus.

For many years the citizens of Ekaterinburg have tried to come to terms with the murder of Russia’s last emperor and his family in 1918. Earlier this year, a proposal was made to rename the city’s main street from Tolmacheva Ulitsa (Street) to Tsar Ulitsa. This new proposal to rename the city districts is the latest effort to rid Ekaterinburg of crimes crimes committed during Soviet times against the Russian Imperial family and the Church.

Representatives of the Russian Orthodox Church have reacted positively to the initiative, now it is up to the authorities to review the proposal and come to a decision, one with great historic significance. The First Hierarch of the Russian Church Abroad Calls Upon the Mayor of Moscow to Remove Petr Voikov’s Name From the Map of the Capital
His Eminence Metropolitan Hilarion of Eastern America and New York, the First Hierarch of the Russian Orthodox Church Outside of Russia, called upon Mayor Sergey Sobyanin of Moscow to remove the name of Petr Voikov, one of the organizers of the murder of the Royal Family, from the maps of the capital. 60,000 Mark Royal Days in Ekaterinburg
Paul Gilbert
On the evening of 16/17 July, to honour the memory of the murdered Russian Emperor Nicholas II and his family, more than 60,000 Orthodox faithful took part in the 20-km royal procession pilgrimage from the Church on Blood in Honour of All Saints Resplendent in the Russian Land in Ekaterinburg to the Monastery of the Royal Martyrs at Ganina Yama.
Comments

John Newbery5/2/2016 6:45 pm
I watched the Liturgy for Pascha at Ekaterinburg on Soyuz tv on the Internet in England. It looked a lot of hfun...especially when the servers were throwing eggs up to the choir in the loft !
×