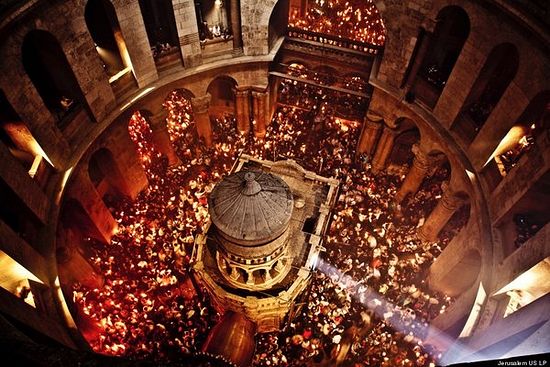 The Holy Fire has descended in the Church of the Holy Sepulchre in Jerusalem.

The Holy Fire appeared in the edicule (the small chapel built over the burial place of Christ) during the prayers of Patriarch Theophilos of Jerusalem.

After the fire’s descent the Patriarch passed the holy gift to the faithful who lit from it their bundles of thirty-three candles, per the age of Christ.

The descent of the fire was preceded by a complex ceremony: the doors of the sepulchre were sealed by with a large wax seal as a sign that its inspection had finished, and in it was found nothing that would allow the Patriarch of Jerusalem to light the fire by any ordinary means.

By this time the church was filled to overflowing with believers—both local Arab Orthodox and pilgrims from various countries. Large groups of believers traditionally arrive to the Holy Land during these days from countries of the former Soviet Union.

Shortly after the sealing of the edicule Arab Orthodox youth ran into the church, whose annual presence is without fail. Young people sit on one another’s shoulders, supplicating the Mother of God and the Lord to grant them the Holy Fire, calling out: “Our faith is true, our faith is Orthodox.”

Shortly before the arrival of Patriarch Theophilos the seal was removed from the door of the edicule, and a large lampada and thirty-three candles were carried into the tomb. Then the patriarch entered and began to wait. Those present continually prayed for the granting of the Fire until the time of its appearing.

At the ceremony in the church was present, in particular, the delegation of the St. Andrew the First-Called Foundation, which, closer to midnight, will deliver the fire to the patriarchal Paschal service in the Church of Christ the Savior in Moscow. The fire will also be sent to dozens of Russian regions and countries both near and far.

Oyekanmi Osikphemhi5/5/2016 11:46 am
Come receive the light,the unwaning gift of life,let us Glorify Christ who did arise from the dead. I love orthodoxy,its a beautiful way of life. Christos Anesti,Alithos Anesti

ASMA HAMARNEH -TREY5/4/2016 1:08 am
good evening
i was wondering sence the fair apper in the orthodose Easter why the catholic church still have thier Easter not in the same time with us ??

adeeb joudeh5/1/2016 9:22 am
Wishing you all peace love and happiness at Easter and always!!!!!
Adeeb joudeh
Keys custodian of the holy Sepulchre in jerusalem .
×