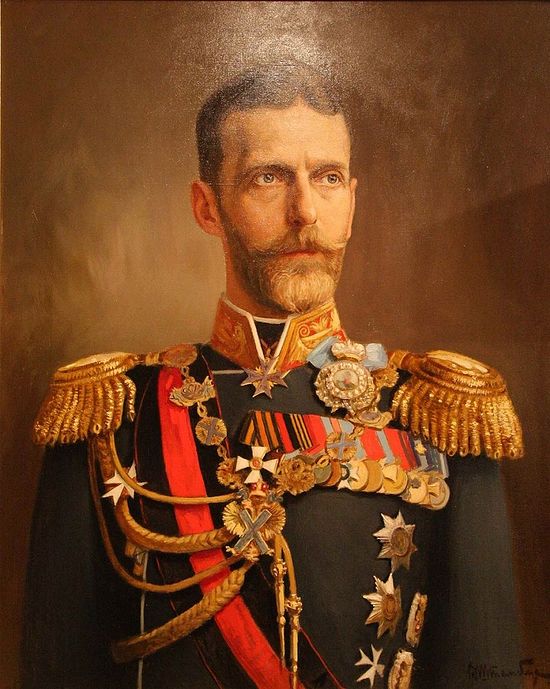 Grand Duke Sergey Alexandrovich was born on 11 May (O.S. 29 April) 1857 in Tsarskoye Selo. He was the fifth son and seventh child of Emperor Alexander II and Empress Maria Alexandrovna. He was an influential statesman and public figure during the reigns of his brother Emperor Alexander III and his nephew Emperor Nicholas II, who was also his brother in law through Sergey's marriage to Elizabeth the sister of Empress Alexandra Feodorovna.

Sergey Alexandrovich received an excellent education. The legal scholar, Actual Privy Councilor K. P. Pobedonostsev taught the encyclopaedia of law to him; the lawyer and statesman N. S. Tagantsev introduced to him state law, the economist and author V. P. Bezobrazov lectured him on political economy; history was taught to him by the rector of the Moscow University, historian S. M. Soloviev; and Russian literature by Professor O. F. Miller. Together with history professor K. N. Bestuzhev-Rumin, Sergey Alexandrovich toured the north of Russia to explore the historical monuments and shrines.

In 1877, the Grand Duke joined the army in the Balkans, where at that time there was a Russian-Turkish War (1877-78). Grand Duke Sergey Alexandrovich was awarded the Order of St. Grand Martyr and the Triumphant George of IV degree for courage on the battlefield. In 1882 he was appointed commander of the 1st Battalion of the Preobrazhensky Life Guards Regiment.

Soon after his return to St. Petersburg Sergey Alexandrovich assumed the duties of the chairman of the Imperial Orthodox Palestine Society, which collected, developed and spread information throughout Russia about the holy places in the Orient, and provided assistance to Russian pilgrims. The Grand Duke initiated and funded excavations in Jerusalem, at the site of which there was built a church in the name of the Holy Prince Alexander Nevsky, in memory of the Tsar-Liberator Alexander II.

Sergey Aleksandrovich was the honorary chairman of numerous Moscow Society charities: education and training of blind children, the Society for patronage of homeless and released from juvenile detention, the Moscow department of the Russian society for protection of public health; a patron of Almshouses of Crown Prince Nicholas, the Moscow Society of the mutual promotion of handicraft, Auxiliary cash printers, the Charitable society for older artists; the patron of all parish schools of the Moscow diocese, shelter of Sergievsky community in St. Petersburg, Pskov real school; president of the Society care about the children of persons exiled by judicial sentence to Siberia and other public organizations. The Grand Duke also was the patron and honorary chairman of many scientific institutions - the Academy of Sciences, the Academy of Fine Arts, the Society of Artists of historical painting, Moscow and St. Petersburg Universities, Moscow Archaeological Society, the Society of Agriculture, the Society of Natural Sciences, the Russian Musical Society, the Archaeological Museum in Istanbul and Historical Museum in Moscow and the Moscow Theological Academy, the Orthodox Missionary Society, Division of distribution of spiritual and moral books.

In 1891, the Grand Duke Sergey Alexandrovich was appointed Governor-General of Moscow. In December 1894 he became a member of the State Council, and after a year and a half - the commander of the Moscow Military District. During his tenure as governor-general the Grand Duke took an active part in the beautification of the capital. Sergey Aleksandrovich supported pro-government labour organizations and took a firm stand against the rebels and revolutionaries, believing that it was necessary to take tougher action against terrorists. The Government had not supported the Grand Duke and in January 1905 he voluntarily relinquished the post of governor-general.

On 17 February (O.S. 4 February) 1905, at about 3 p. m., Sergey Alexandrovich was assassinated by a bomb, thrown by terrorist Ivan Kalyaev. Discovering the Grand Duchess Elizabeth
A Conversation with English Pilgrims in Moscow
Jesse Dominick, John Harwood, Maria Harwood, Paul Oxborrow
A group of pilgrims from England recently made their way to Russia to explore the spiritual treasures of Moscow, and particularly those relating to the lives of their parish patron St. Elizabeth the Grand Duchess and New Martyr, and all the New Martyrs and Confessors who suffered under the Communist Yoke in the twentieth century. They took some time out of their busy schedule to chat with us at Sretensky Monastery and offer their thoughts and reflections on their trip, as well as the history and current state of Orthodoxy in England.
Comments
×