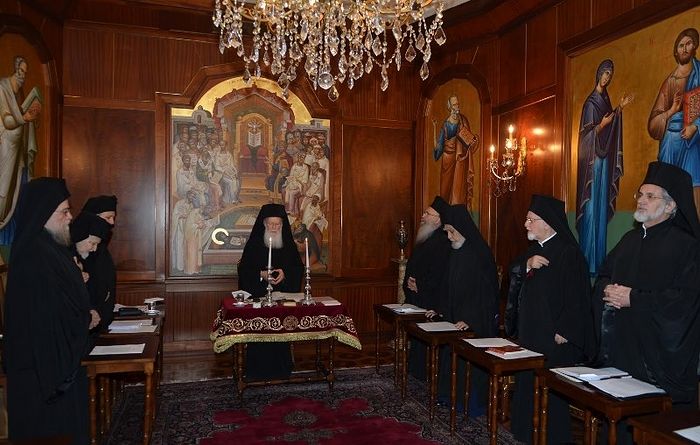 A communiqué was issued today, Tuesday, March 31, by the Holy Synod of the Ecumenical Patriarchate, dealing with issues concerning the Great and Holy Council to be held on Crete in a few days.

Furthermore, the synod of the Ecumenical Patriarchate also dealt with the well-known issue of Qatar, which concerns the Patriarchates of Antioch and Jerusalem.

Church circles, however, commenting on today's communiqué, said that doing so after Pan-Orthodox Council will be meaningless, since the two primates should celebrate the liturgy together on Crete.

"The issue really should be resolved before the Great and Holy Council..." said an Antiochian metropolitan to Romfea.gr. Patriarchs of Jerusalem and Antioch to meet in Cyprus to solve dispute
Patriarch Theodoros of Alexandria and All Africa, who, on the morning of February 17, met with Cypriot president Nikos Anastasiadis, accompanied by Archbishop Chrysostomos, has expressed the hope that the problem will be resolved. Speech of His Beatitude Theophilos of Jerusalem at the Beginning of the Deliberations of the Primates
His Beatitude Patriarch Theophilos of Jerusalem
“The purpose of our synaxis is truly holy and sacred, the completion of the work that was commenced a long time ago by our fathers, namely the study, review and resolution of vital issues and problems facing our flocks and our fellow human beings across the globe."