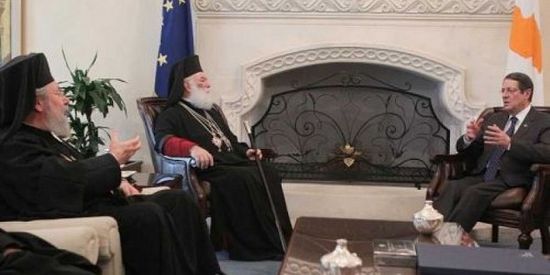 The Patriarchs of Antioch and Jerusalem, upon the initiative of the Archbishop Chrysostomos of Cyprus, will meet in Cyprus in front of the cameras in order to resolve the dispute between the two Patriarchates.

Patriarch Theodoros of Alexandria and All Africa, who, on the morning of February 17, met with Cypriot president Nikos Anastasiadis, accompanied by Archbishop Chrysostomos, has expressed the hope that the problem will be resolved.

Asked about the dispute between the Patriarchates of Jerusalem and Antioch concerning jurisdiction over the city of Qatar, the Patriarch of Alexandria stated that the issue had already been discussed at the Synaxis of the Primates in Geneva. Met Saba Esber Responds to the Patriarchate of Jerusalem's Statement

Met Saba Esber Responds to the Patriarchate of Jerusalem's Statement
Every observer of Church history knows that the Fathers of the Fourth Ecumenical Council, held in Chalcedon in 451, decided "out of reverence for the Lord's Passion and Resurrection" to elevate the city of Jerusalem, which at the time was a bishopric subject to the Patriarchate of Antioch, to the rank of patriarchate. Over the course of time, Antioch gave her some of her bishopric so that she could have a patriarchal existence. We could mention, for example, that Haifa remained a bishopric of Antioch until the 18th century. Church of Antioch breaks off Eucharistic communion with Patriarchate of Jerusalem
The reason of the break-off is the dispute on the canonical jurisdiction of Qatar territories, to which both Local Churches have claims.
Comments

Ronald A. G. SARKIS2/27/2016 12:46 am
Quarrels between Orthodox Churches upset to my humble opinion, Jesus and believers considerably. These prejudice terribly Churches' image. No way, 1) present dispute should be resolved immediately; 2) Enough is enough, no room for eventual, new quarrels should be left.
×