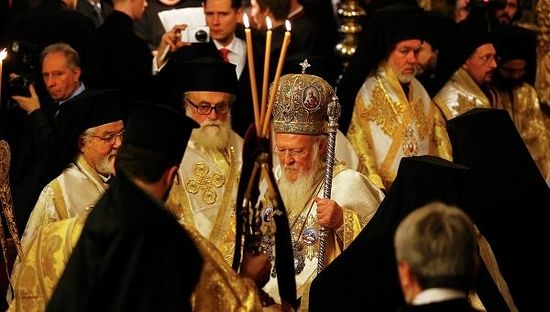 From the general secretariat of the Ecumenical Patriarchate:

Today, under the chairmanship of His All-Holiness Ecumenical Patriarch Bartholomew, an extraordinary meeting of the Holy Synod of the Ecumenical Patriarchate took place with the participation of all the bishops residing in Constantinople, which reviewed the progress of the preparations by the grace of God for the soon-to-be convoked Holy and Great Council of the Orthodox Church.

It is with surprise and perplexity that the Holy Synod received the recently voiced positions and opinions of a number of sister Orthodox Churches, and stated that a revision of the already-planned conciliar process exceeds all institutional bounds. And therefore it is expected that, in accordance with the Regulations for organization and work of the Holy and Great Council, the Primates of the Holy Orthodox Churches will submit their “proposals for amendments, corrections, and additions to the unanimously approved texts of the Pan-Orthodox pre-conciliar meetings and the Meetings of the Primates as concern the council’s agenda of the day” (see article 11), with the ultimate goal of formulating and adopting decisions during the work of the Holy and Great Council, invoking the aid of the All-Holy and Perfecting Spirit.

As the Church bearing the primary responsibility for the upholding of Orthodox unity, the Ecumenical Patriarchate calls all to rise to the occasion and in the previously established terms to take part in the work of the Holy and Great Council, according to the Pan-Orthodox decisions, as signed by the Primates at their meetings, and as authorized by the representatives of the Church during the course of the long process of pre-conciliar preparations. Address of Metropolitan Benjamin of Vladivostok and Primorsk on Orthodox participation in the World Council of Churches
April 19, St. Tikhon’s Orthodox University for the Humanities, with the blessing of His Holiness Patriarch Kirill, hosted the conference: “The Pan-Orthodox Council: Opinions and Expectations.” Taking part in the work of the conference were prominent bishops, clergy, and laity. Among those called to take part in the conference was one of the most authoritative hierarchs of our Church, Metropolitan Benjamin (Pushkar) of Vladivostok and Primorsk, head of the Primorsk Metropolia. However Vladyka was not able to be present in Moscow, but sent his judgment-presentation to the conference concerning those themes which most concerned him. A photocopy of the document was given to each conference participant. As the opinion of Vladyka Benjamin is important for many children of our Church, we offer this document to the reader’s attention, written in the form of an address to the rector of the university, Archpriest Vladimir Vorobyev.

Peregrinus6/7/2016 2:23 am
The title of this article is misleading. In the selfsame communique the EP asks the dissenting churches to bring their proposals to the council for discussion. Consequently, it is the dissenters who are refusing to discuss the issues in question by refusing to participate in the synodal process.
×