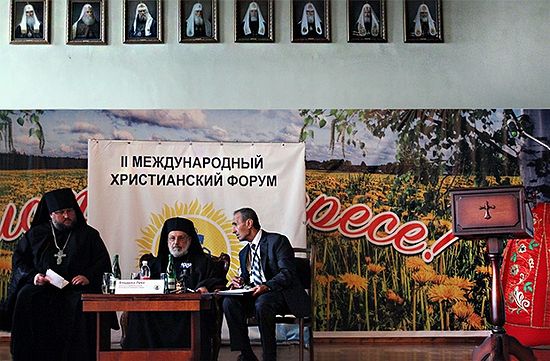 The intrigue surrounding the relationship of the Russian Orthodox Church to the Pan-Orthodox Council, planned to take place June 16-27, will soon be resolved. “Russian Planet” learned of this at the Volgograd Second International Christian Forum. At the moment the Moscow Patriarchate has taken an ambivalent position, supporting critics and supporters of the Council.

“To my knowledge, I can bring you the good news that our Russian Orthodox Church will after all announce that it will not be taking part in the Pan-Orthodox Council on the island of Crete,” said the vice president of the “Jerusalem” Russian Spiritual and Cultural Heritage Center, Oleg Fomin at a meeting of the “Religion and Mass Media” section of the forum. However, he did not disclose his sources and did not specify the possible shape of the refusal to travel to Crete.

In the expert’s opinion, “this event is meant to be a strengthening of the position of the so-called Ecumenical Patriarch Bartholomew, which is under the influence of the USA.” Fomin also suggested that Bartholomew used to be a Mason. “It’s obvious that he is ready to give Orthodox positions to Catholics and to whomever he pleases. That is, he doesn’t act in the interests of Orthodoxy,” emphasized the head of the “Jerusalem” center.

“Thank God that our Church will soon officially announce our refusal to attend the Council. Many believers have been troubled on its account. Not only the churched are worried about it, but also those who consider Orthodoxy our foundational ideology and spiritual platform for development and existence,” Fomin added.

The representatives of Orthodox Churches present at the forum did not comment on their relationship to the Pan-Orthodox Council. Archimandrite Synesius of the Athens metochion of the Greek Orthodox Church flatly refused to speak to the question. Vicar to the Antiochian Patriarch, Bishop Luke of Seidnaya answered quite evasively, making it clear that participation in the Council and its realization is a matter of debate and not within his competency.

Recall that last week the Synod of the Bulgarian Orthodox Church, under the chairmanship of Patriarch Neofit, refused to send a delegation to Crete, citing a number of unresolved key issues and the impossibility of changing the date of the council. Earlier, criticisms of the Council’s documents were made by Athonite elders and various hierarchs of the Local Churches.