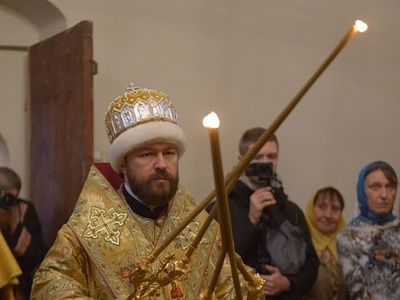 "The representative of our Church won’t take part in drawing up the message," the source said, noting that the work was to be done by Metropolitan Hilarion (Alfeyev), the Chairman of the Moscow Patriarchate's External Church Relations Department.

"He was to be in Crete these days, but under the circumstances when Churches are one after another refusing to attend the Pan-Orthodox Council, there isn’t much point to us taking part in work to draft the message from just several Churches," the source said.

Under the Pan-Orthodox Council regulations, texts or new issues that were not unanimously approved by Pan-Orthodox pre-Council conferences and meetings of the primates cannot be submitted directly for Council discussion with the exception of the Council’s message.

Its draft will be prepared by a special all-Orthodox Commission one week before the Council is convened and will be subject to approval by the primates of the Orthodox churches, the document says.

Over the recent days, Orthodox Churches have been one after another refusing to attend the Council.

Problems sprang up in the course of final preparations for the assembly recently, with the Bulgarian Orthodox Church saying its clerics will not attend the Council, since more preparations are needed.

The Georgian Orthodox Church, too, voiced objections against the documents on Christian marriage and the contemporary mission of the Church.

Should at least one of the 14 churches be absent from the Council, it will lose the Pan-Orthodox status. The Russian Orthodox Church proposed convening an urgent pan-Orthodox consultative conference before June 10 ahead of the Holy and Great Council. The Holy Synod of the Ecumenical Patriarchate on June 6 made a decision to proceed with routine preparations for the Council, due in Crete on June 17-26. ROCOR HOLY SYNOD on Pan-Orthodox Council Texts
Communication of the Holy Synod of the Russian Orthodox Church Outside of Russia to the Clerics and Faithful—13 April 2016.
The process of addressing the pastoral needs of any given age is one which requires both tremendous prayer and ascetical devotion from all Christians, but also the dedicated, deliberate work to ensure, in any document the Church may put forward, the faithfulness to the Gospel we have inherited. All such texts, now as throughout history, go through many stages of preparation and revision; and the fact that we, together with others, have identified serious problems with some of the documents pending consideration by the forthcoming Council should be a cause for neither fear nor anxiety. The Holy Spirit Who always guides the Church in love, is not far from us today; and the Church is not in our times, nor has she ever been, without the active headship of her True Head, Christ our God, Whom we trust with full faith will guide His Body in all truth.
Comments
×