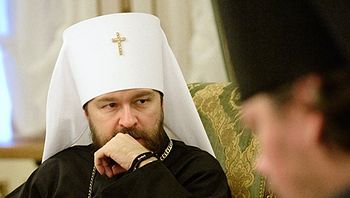 The Russian Orthodox Church will hold an emergency meeting of its Holy Synod to determine how to proceed in the situation where a number of Local Orthodox Churches have refused to participate in the Pan-Orthodox Council on Crete, and to decide about its own participation in it, the Chairman of the Department for External Church Relations, Metropolitan Hilarion of Volokolamsk told RIA-Novosti on Tuesday.

The Synod of the Antiochian Orthodox Church published on Tuesday its decision refusing to participate in the Pan-Orthodox Council. Such a decision was also made last week by the Bulgarian Church.

The Russian Orthodox Church has called upon the Local Churches to summon an emergency pre-conciliar meeting in connection with this “extraordinary situation” which has arisen in the course of the preparations for the Council. In its turn, the Patriarchate of Constantinople announced that “no institutional structure can re-examine the conciliar process already begun.”

“I think we need to have another meeting of the Holy Synod in order to understand how to proceed in such a situation, because the fundamental positions, which we stated throughout the pre-conciliar process, are now being practically ignored. We need to respond somehow,” said Metropolitan Hilarion.

The Pan-Orthodox Council, which has been being prepared for more than fifty years, is expected to become the first gathering of primates and representatives of the Orthodox Churches in more than a thousand years. However, in the words of Patriarch Kirill of Moscow and All Russia, the impending Council will not be “Ecumenical,” because “it has not been called to resolve dogmatic questions, or to introduce something new into the liturgical life of the Church or to its canonical order.” The Holy Synod of Bishops Deliberates on Problems Arising in Preparation for the Pan-Orthodox Council
In accordance with the decision of the Holy Synod, one way out of this extraordinary situation would be to convene an extraordinary Pan-Orthodox Pre-Council Assembly to consider the situation as it has evolved and the examination of the corrections of the draft documents submitted by the Local Orthodox Churches with the aim of developing unanimous proposals. The conclusions of such an assembly, as the Holy Synod declared, could lead to a decision regarding the possibility of convening the Pan-Orthodox Council at the scheduled time.
Comments