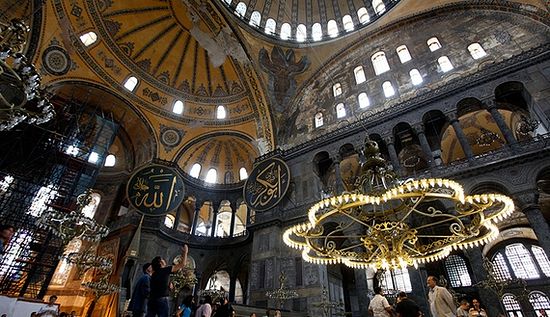 The Haghia Sophia Museum, which is one of the most popular tourist sites in Istanbul, was built as a Greek Orthodox Christian basilica in 527. It was converted to an imperial mosque when the Ottomans conquered Istanbul in 1453. Following renovations in 1931-35, it was reopened as a museum under the rule of the newly established secular Republic of Turkey. Ever since 1931, the yearnings of the Turkish conservatives to reopen the site as a mosque has never ceased. In the last decade, with tacit government approval, Islamist groups as well as ultranationalists have periodically carried Haghia Sophia to the headlines. They have organized rallies calling upon the government during Friday sermons and initiating petitions to focus the public attention on the matter.

Finally on April 11, 2015, a day before Greek Orthodox Easter Sunday, which coincided with the Prophet Muhammad’s birthday, for the first time in 85 years there was a Quran recitation inside Haghia Sophia. In November 2015, a young visitor from Sanliurfa province, Fatih Dortbudak, performed salat (prayer) inside the museum. As onlookers shared the photo, the hashtag #AyasofyayaOzgurluk (Freedom to Haghia Sophia) became a trending topic on social media. In December, Yusuf Halacoglu, the Nationalist Action Party’s deputy parliamentary group chair, submitted another bill to the Turkish parliament requesting the reopening of Haghia Sophia as a mosque. He had submitted a bill in November 2013 as well. Every year on May 29, more extravagant celebrations of Istanbul's conquest and TV documentaries emphasizing the concept of "perfidious Byzantine" provoke feelings of entitlement to the Haghia Sophia mosque.

This year, on May 28, thousands gathered in front of Haghia Sophia and prayed for the building to serve as a mosque. The activists claimed they have gathered 15 million signatures for their cause. It has become such a contentious matter that when the German government approved a resolution declaring the 2015 Armenian massacre a genocide, senior Justice and Development Party (AKP) officials suggested tit for tat — that Turkey should now allow Haghia Sophia to become a mosque.

The most crucial step into opening Haghia Sophia as a mosque was announced June 1. State-owned TV channel TRT informed viewers that they will be broadcasting a Ramadan show, including a reading of the Quran, from Haghia Sophia every sahur (predawn meal). The first guest of the show was none other than Mehmet Gormez, the head of the Turkish Religious Affairs Directorate. He talked about the dome of Haghia Sophia and explained its importance in Islamic history.

This decision set off the alarm bells among secular Turks and Orthodox Christians. The Greek Ministry of Foreign Affairs promptly issued a statement expressing concerns over this “regressive” decision showing lack of respect for a UNESCO World Heritage site. The statement noted that these actions are not compatible with “modern, democratic and secular societies.”

The Turkish Ministry of Foreign Affairs on June 8 went on the offensive inviting Greece to “use common sense in its rhetoric and statements,” while accusing them of not having a mosque in its capital city and hence suppressing the religious freedoms of Muslims in Thrace.

As the war of words between the two governments continues, the Greek officials Al-Monitor spoke with asserted this should not be a bilateral matter, taking their concerns to the European People’s Parliament.

In the meantime, international views are conflicting as well. While the US State Department commented that Turkey should respect the traditions of Haghia Sophia, Germany stated that the use of Haghia Sophia is a domestic Turkish matter.

On June 10, when the Turkish media headlines suggested that the Greek consul general in Istanbul was sent to Haghia Sophia around 2 a.m. to check out the Quran recital, pro-AKP media outlets lashed out in anger asking how the diplomat dared to inspect Haghia Sophia.

A Greek diplomat, who spoke on the condition of anonymity, told Al-Monitor, “In the last five years, Turkey has converted three other churches with the name Haghia Sophia into mosques and senior Turkish government officials keep using Haghia Sophia on social media and other platforms as a bargaining chip whenever something goes against their wishes. This is a monumental building with immense symbolic value for Christians, so we are worried about it becoming a sacrifice for populist policies.”

Aris Abaci, a researcher in Turkish-Greek relations, told Al-Monitor that both sides are sticking to their usual style of fighting words, yet he observed that the rebuttal of the Turkish Ministry of Foreign Affairs this time was different. Abaci said, “For the first time, we see that the Turkish official language argues modernity should not be presented as if it is against Islam. It also indicates that it views Haghia Sophia exclusively from a religious angle.” Abaci added that both sides are approaching the issue in terms of identity politics, hence ending up at a zero-sum game.

Angelos Syrigos, an assistant professor of international law and foreign policy at Panteion University in Athens, agrees that the main fear behind the Greek reaction is that Haghia Sophia will soon be turned into a mosque. “The reason for the transformation will be the need of [Turkish President Recep Tayyip] Erdogan to increase his popularity in view of a referendum that will introduce Turkey to the presidential system,” he told Al-Monitor.

Ridvan Kaya, the chairman of nongovernmental organization (NGO) Ozgur-Der and a columnist for Haksoz, approached the matter from a different angle, posing the question, “Why would it bother the Greeks that it functions as a mosque? Its real purpose is not served when it was a museum, but that was acceptable. When it is a mosque, it is not? Why not?” Kaya also explained that most of the conservative Turks perceived the conversion of a mosque into a museum in the 1930s as the new republic de-Islamizing the country. He said, “Haghia Sophia symbolizes the conquest of the Ottomans. The republic turning it into a museum is viewed as ostracizing Islam.”

Murat Ozer, the chairman of NGO Imkander and an art historian, provided a comprehensive analysis of the situation. Ozer said, “It is a tradition that those who conquer take over the places of worship and convert them to their own. Almost all Byzantium churches were converted in Istanbul and then the Christian population was supported by the sultanate to build new ones. So all existing Greek Orthodox churches of Istanbul were erected after the conquest. The new rulers cared not about destroying what was there, but making sure it became a part of history that could no longer dominate. The main concern is to establish the power and prestige of the empire to the enemies.”

He emphasized his disapproval of this matter becoming an item for opportunistic politics. He said, “Historic resources indicate that when the new republic was established, it was somehow coaxed into handing over Haghia Sophia as a museum.” Many pundits provide a similar argument: Some blame the Kemalist establishment for being too eager to fit into the Western civilization, while others insist Western powers forced it upon Turkey. Either way, it is a matter of independence. So in this perception, full independence cannot happen unless Haghia Sophia serves as a mosque.

Ozer added that the best way to preserve a historic building is to keep it in use. He provided several contemporary examples in Istanbul where a part of a church is functioning as a mosque, while the other part is a museum. “Since Haghia Sophia became a museum, it has been under renovation. Yet when it was functioning as a mosque for over 400 years, it was not deteriorating as fast,” he said.

A Muslim scholar who asked to remain anonymous told Al-Monitor, “The matter of Haghia Sophia has been manipulated shamelessly in the last decade. They are feeding the dream of an Ottoman revival as if one of the cast members of a TV show will appear to reopen Haghia Sophia as a mosque. For pious Muslims everywhere, it is really sad to watch this opportunistic propaganda.”

The worrisome question is precisely that: Can Erdogan reverse the process once the majority of the public is convinced Turkey cannot be independent unless Haghia Sophia is serving as a mosque? Greece Slams Quran Reading in Istanbul's Orthodox Christian Cathedral
The Greek Ministry of Foreign Affairs condemned on Monday the decision by the authorities of Turkey to read the Quran in Hagia Sophia Orthodox Christian cathedral in Istanbul during Ramadan as a regressive and bordering on fanaticism.

Hagia Sophia: Such ecstasy can never be forgotten!
George Kseinos, Doctor-Novelist
Those who over the centuries actually saw the miracle of Haghia Sophia at first hand are innumerable. They spoke over and over again about what they had seen, trying to convey to others too something of its magic and magnificence.
Comments

Kathleen Fossey6/20/2019 7:34 pm
Hagia Sophia is, was, and always will be a symbol for Christianity. Muslims want it because they unknowingly sense Christ's presence in the beauty of this place. He is the Prince of Peace that passes understanding.

Anthony6/19/2016 8:16 pm
I don't really understand what Greece's problem is. Greece voted in an officially atheist Prime Minister, and the Greek state has played a major role in dismantling the nation's religious heritage to conform to the spirit of the world. Latest news is they will no longer require or even abolish prayers in schools. If you reject God, and can't even look after what you have, or show respect for Orthodoxy in that land which is still yours, then what are you stamping your feet up and down for in relation Agia Sophia. Hypocrites. Reminds of an article I read where some Cypriots went to a Russian Orthodox Priest in England, and bemoaned the loss of their Churches in Cyprus. When the priest asked them how often they visited those Churches, the croc tears dried up and they disdainfully retorted ''never''. Fine. You don't look after and respect your inheritance, then God takes away. A lesson for all of us.

biljana6/16/2016 11:32 pm
HAGIA SOPHIA IS A HOLY ORTHODOX CHURCH AND IT ALWAYS WILL BE!! THE TURKS CAN TRY TO MOLD IT INTO WHATEVER THEY WANT BUT IN VAIN! GOD SEES AND KNOWS EVERYTHING!

BE CAREFUL NON BELIEVERS WHAT YOU DO! THE TRUE FAITH WILL TRIUMPH!